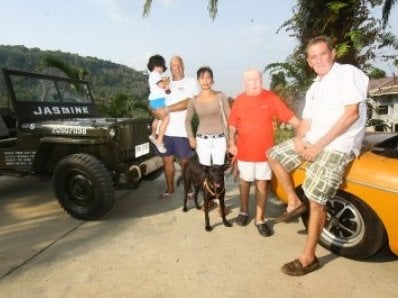 GOMS consists of over 130, presumably grumpy expat and Thai members who get together twice a month to meet, discuss issues which grind their gears and think of ways to raise money for local charities.

There are also a number of classic car enthusiasts in the society, none surpassed by GOMS Rally-Treasure Hunt Event Director John Devenport, who has over 40 years of rally experience.

He told the Phuket Gazette that Sunday’s rally will take a 145-kilometer route through some of the island’s most remote areas while still remaining on tarmac roads.

The grumps – and whoever else wants to join – will set out from their hangout, the Chalong Pier Beer Garden, at 10am.

“This is not a race, but a social event intended to test the driving and navigational skills of the crews while raising money for charity,” Mr Devenport said.

“To ensure that entrants stay strictly on the route, we require proof of passage in the form of photographic evidence of places or buildings they pass. The rally is divided into morning and afternoon sessions with a lunch break in between. Entrants must complete the morning session within two and a half hours, and the afternoon within one and a half hours, or face a time penalty,” he added.

The event will culminate with an awards ceremony at the Chalong Pier Beer Garden, where winners will be awarded and losers will presumably be even more grumpy.

This event is not only open to GOMS members, but anyone else who wishes to have some fun on wheels.

A maximum of 40 vehicles are permitted to join the rally. There are still limited places available, priced at 1,500 baht, so if you wish to join, call John Devenport at 087-265 8845 or email johndevenport@hotmail.com.

You can also visit the GOMS website at www.phuketgoms.org.