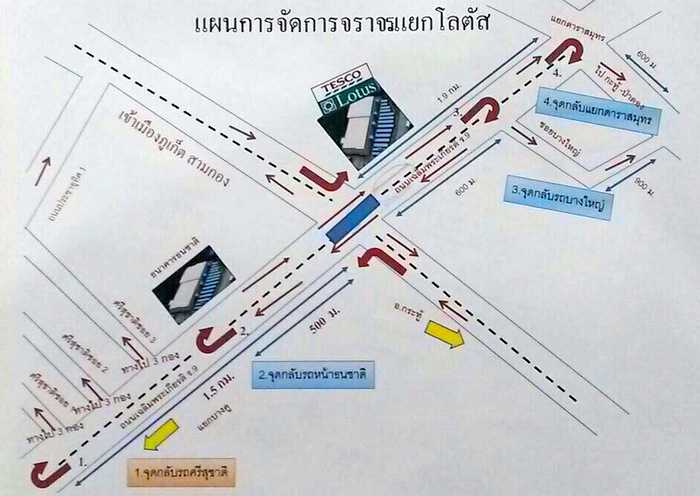 PHUKET: Phuket City Police have announced that the lanes of traffic flowing between Kathu and Samkong at the Samkong Intersection, the site of the Tesco underpass, will be closed from December 6 to March 1.

During that time, motorists approaching the intersection from the east or the west will be forced to make a left turn, and then proceed to the nearest u-turn to continue in the intended direction, explained Phuket City Police Deputy Superintendent Wisut Krengjing.

The lanes will close at 10pm this Saturday, added Lt Col Wisut, who heads the Phuket City Traffic Police.

“We have to close part of the intersection in order to carry on with underpass construction. However, motorists heading north and south on the bypass road can still cross the intersection unimpeded,” Col Wisut told the Phuket Gazette today.

Motorists driving from Samkong to Kathu must make a left turn at the intersection and proceed to the u-turn in front of Phuket International Hospital, he explained.

The nearest u-turn for motorists travelling from Kathu to Samkong after making a left at the intersection is about 1.5 kilometers up the bypass road.

“The intersection will be closed for three months, but Traffic Police will be there to facilitate traffic flow,” said Col Wisut.

“We apologize for the inconvenience.”