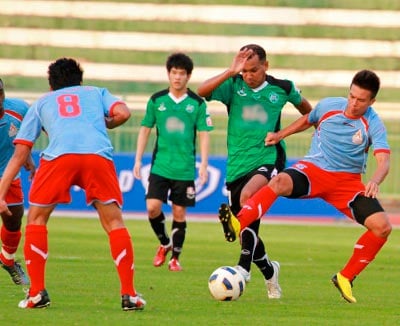 PHUKET: FC Phuket’s first Thai League Division 1 home game of the season ended in frustration as they were held to a 1-1 draw against Rajpracha FC at Surakul Stadium on Saturday evening.

In front of a crowd of over 2000, Phuket couldn’t do enough to prevail over a team intent on clinching a draw.

The visitors brought howls from the Phuket’s “Hulk” supporters in the stands, who were incensed with numerous incidents of time-wasting and play-acting. Every slight touch on a Rajpracha player saw him tumble to the ground in feigned agony, only to get back up on his feet seconds later.

The niggly nature of the game wasn’t helped by a referee who failed to stamp out this type of behavior early in the game.

Phuket threw everything at their opponents during a frantic last quarter, but were unable to find the winning goal that they deserved.

In near perfect playing conditions, the home side opened brightly with Sarat Yooyen causing the visitors no end of problems down their right. Sarat’s brilliant free-kick crashed against the bar, setting up Kone Adama to nod home from close range to open the scoring for Phuket on 36 minutes.

Although Phuket did go in at the break a goal ahead, the lead didn’t last long into the second half, when Rajpracha’s Rewat Meeleum equalized from close-range.

Both teams spurned chances during the second period, with Phuket slowly turning the screw in search of a winner.

Rajpracha seemed satisfied with a draw, doing everything in their power – plenty of it outside the rules of the game – to return home with a point.

One of their defenders saw red during the second-half, while their goalkeeper should really have joined him after raising his hand against Adama late in the game.

So it’s disappointment for Phuket but they will have a chance to put it behind them when they face Big Bang Chulalongkorn University at Surakul Stadium on March 13. Kickoff is at 6pm.

Phuket cobras running out of room, into houses