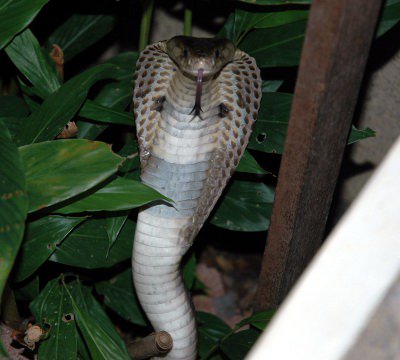 PHUKET: A family in Phuket had their regular laid-back Saturday evening rudely interrupted by a cobra trying to enter their home.

“We had dinner with family and friends in the garden near the pool. After dinner, my wife, Nongyao, cleared the table, and on her way back to the kitchen she encountered a snake,” explained Lothar Schudt, who has lived in Rawai off Saiyuan Road, for 16 years.

“I was already in the pool enjoying the lovely evening when my wife started yelling: ‘Snake! Snake!’,” he said.

Despite his many years in Thailand, Mr Schudt said he initially had trouble understanding what his wife was screaming. “I couldn’t tell if she was yelling ‘Rat!’ [noo] or ‘Snake!’ [ngoo], which are very similar in pronunciation,” he explained.

After failing to get through to several numbers published as snake removal services, he called the Kusoldharm Foundation who promised to send someone immediately.

“Fifteen minutes later, Sayon Thommapun of Chalong Rescue and his assistant were at my house, where I had trapped the snake in a confined area.

“It took them only about five minutes to catch the snake, which turned out to be a female cobra,” said Mr Schudt.

“They promised to release the cobra in the hills,” he added.

Although happy the snake would be released back into the wild, Mr Schudt expressed his concern over the extent of encroachment into snakes’ natural habitat on Phuket.

“Like many other wild animals in Phuket, snakes have lost most of their habitat due to construction and over-development. They have nowhere to go.

“This was the first time in all these years that we have had a cobra of this size on our property. We keep our house clean and there are no rodents, which cobras normally feed on, on our premises – but this animal had nowhere to go.

“In the end, all of us where very happy that Khun Sayon and his assistant did a very good job to secure the snake and release it in a proper area. Thank you for the quick response Khun Sayon,” he said.