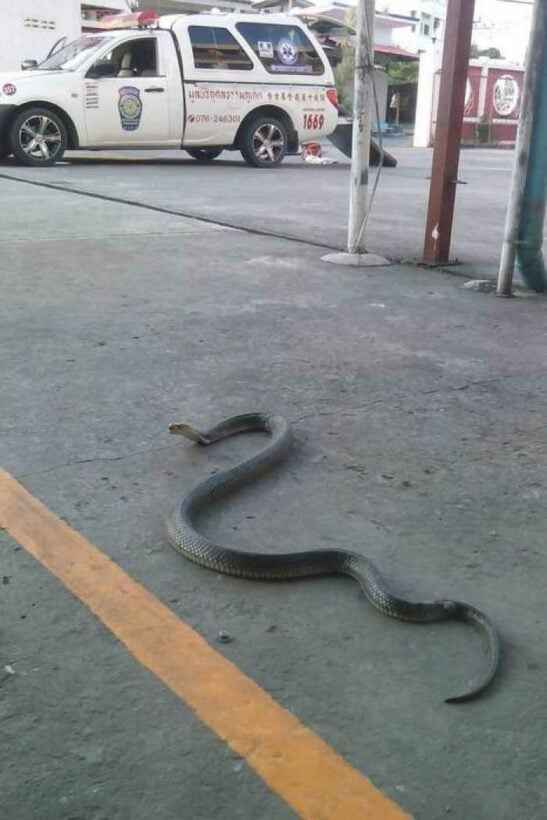 PHUKET: Kusoldharm Foundation rescue workers snapped into action yesterday when a two-meter-long cobra was found outside of a house only 20 meters away from the Phuket Thaihua Asean Wittaya School.

Watchara Srikacha and a few other rescue workers rushed to the scene on Wichit Songkram Road Soi 4, near the Darasamuth Intersection, after a resident notified them of the reptile at about 5pm.

“We sped to the scene before the snake go could somewhere else,” Mr Watchara told the Phuket Gazette.

“The house is only 20 meters from the school. It could have been very dangerous if the cobra got onto school grounds. Fortunately, nobody was hurt.”

It took rescue workers about 25 minutes to catch and bag the snake. It was then released at an undisclosed jungle location.

“We took extra precautions when dealing with the cobra, as they can be dangerous,” Mr Watchara said.

Mr Watchara urged islanders to avoid handling snakes, unless the person doing so had experience.

“Due to the current wet weather, cobras and other kinds of snakes may try to find a dry place to stay and find food to eat, which is often in residential areas. It is important that you do not try to handle such an animal by yourself,” he warned.

“The best thing you can do is to call us. We are available around the clock.”

The Kusoldharm Foundation can be reached at 076-246301, 24 hours a day. It’s recommended that callers be able to speak some Thai.