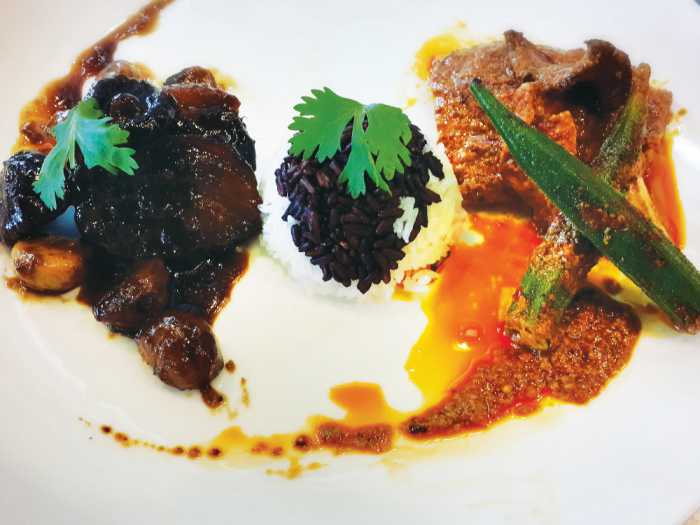 PHUKET: There is an ancient Thai tradition of allowing oneself one weekend of gluttony, hedonism and feasting in a year. Unfortunately, that actually isn’t true – no such tradition exists. But if it did, JW Marriott’s Gourmet Weekend, which will take place from November 14 to 16, would be the perfect opportunity to bring it to life.

Phuket gourmets: prepare your pallets and stomachs, a true culinary extravaganza is coming your way. With names such as Chef Peter Manifis of InContro restaurant in Perth, Chef Norio Nomoto of JW Marriott Bangkok, Chef Nooror Somany-Steppe from Blue Elephant International cooking school and restaurants, Chef Tim Butler of Eat Me restaurant in Bangkok as well as JW Marriott Phuket’s own Chef Dietmar Spitzer on the bill, the Gourmet Weekend is set to rock the worlds of the island’s foodies.

Simply take a glance at the menu of the Weekend’s final charity dinner: Organic prawn yuzu miso foam, warm rabbit rillettes with heirloom carrot and jalapeno comfit or hot-smoked Glacier 51 gumbo-inspired risotto. These are just a few from a long list of dishes that the event’s guests will enjoy. The funds raised during the charity dinner will benefit the Mai Khao Marine Turtle Foundation.

But, before the Gourmet Weekend comes to its memorable finale, the island’s culinary connoisseurs will be able to take part in a series of specialist-led cooking demonstrations and set dinners, and learn from the world-class chefs how to prepare dishes such as Tumee orange curry with sea snake-head fish, pearl shell ceviche with Yuzu granite, chilled avocado soup with king crab and more. In fact, the list of food events and dishes on the Weekend’s agenda is simply too long to print.

The presentations, set dinners and the charity dinner will be held at JW Marriott’s restaurants: Ginja Taste, Cucina, Kabuki Japanese Cuisine Theater and Andaman Grill, as well as the resort’s Marriott Cafe.

For those willing to take full advantage of the event’s offering, a special four nights/five days package was introduced, combining selected cooking demonstrations and set dinners, and the charity dinner, along with accommodation in a Deluxe Sala Garden View room. It also includes daily breakfast, and is priced from 8,750 baht +++ per night for one-person single accommodation and 10,750 baht +++ per night for two-person double accommodation. Tickets to the charity dinner only are priced at 2,900 baht ++ per person while the cooking demonstrations and the set dinners are priced at 1,900 baht ++ and 2,500 baht ++ respectively.

To book your ticket for the weekend, email bookmarriott@marriotthotels.com or call 076 338000. For more information, go to jwmarriottphuketresort.com.