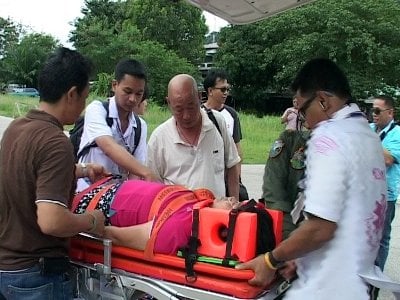 PHUKET: Royal Thai Navy medevac officers scrambled this afternoon after receiving a call to airlift a Chinese tourist from Koh Racha Yai back to Phuket.

Cdr Jongjaroen Jangjun, Duty Officer at the Third Naval Area Command Operations Center, told the Phuket Gazette that 53-year-old Xiao Ming Hao was on a boat trip to Koh Racha Yai, about 25 kilometers south of Phuket, when she started suffering severe back pain.

“She suffers from a spinal condition and high blood pressure. During the boat trip to the island there were big waves and the wind was blowing very strong, which triggered severe back pain,” he said.

“The conditions were so rough that she was rendered immovable,” he added.

Tour organizers on Koh Racha Yai called the Narenthorn Center hotline 1669. Officers there called the Third Naval Area Command, requesting a helicopter be sent to pick her up, he said.

“We received the call for help about midday,” said Cdr Jongjaroen.