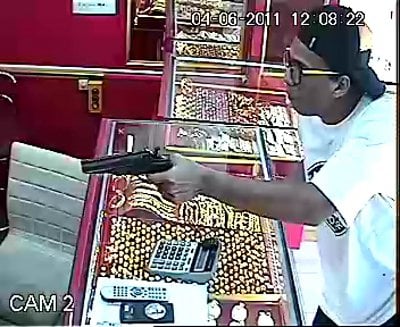 PHUKET: The region’s top police officer came to Phuket on Thursday to follow up on the investigation into the gold heist reported by the Phuket Gazette earlier this month.

The man robbed the family-owned Thong Thanet gold shop near the Slaughterhouse Intersection in Phuket Town. Gold items stolen were valued at over six million baht.

Shop owners Jirasak and Chantana Tarnattanasombut later increased the reward for information that leads to the return of the gold to 200,000 baht.

Despite good-quality CCTV images of the heist, there has been no further evidence collected and the man has not yet been identified. Police are still awaiting fingerprint analysis results, he added.

“Despite reports that this man has committed crimes in Surat Thani, we are unable to positively link him to those cases due to his common appearance,” Lt Col Yongyut Krongmalai said.

To view the full video of the heist click here.

Anyone with information that could help in the investigation is encouraged to contact any of the following high-ranking members of the Phuket City Police force: