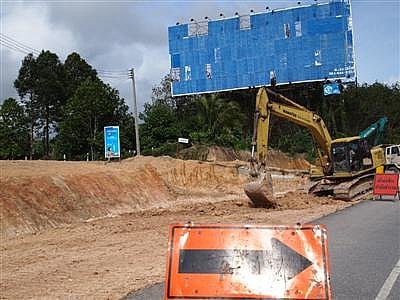 PHUKET: The Highways Department office in Phuket is asking motorists to slow down and exercise caution when passing work on the airport road expansion project in Thalang.

Aroon Saneh, head of the regional Highways Department that covers Phuket and parts of Phang Nga, said work on the 120-million-baht project to widen a 4.6-kilometer stretch of the road from two lanes to four is proceeding according to schedule.

The work, funded under fiscal budgets for 2011 and 2012, got underway in July and is scheduled for completion in January 2012.

The project contractor is currently doing the excavating and grading work needed to widen the road, Route 4026, from the Thepkrasattri Road junction eastward.

The project is needed to accommodate an expected increase in passenger traffic at Phuket International Airport to 12.5 million annually by 2018.

Mr Saneh said motorists’ patience will be rewarded in the long-term, as travel through the area will be “more efficient” once the work is completed.

Travel should also be made safer, as overtaking vehicles will no longer need to dodge oncoming traffic. The road has been the site of numerous fatal accidents over the years, many involving tourists and taxi drivers rushing to make outbound flights.