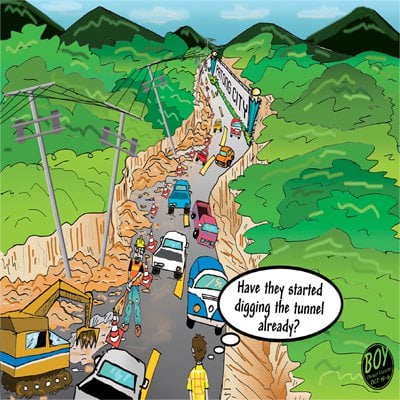 PHUKET: There is a Thai idiom, gam dai khrai gaw gam nan yawm sanawng, that has as its English-language equivalent, “You reap what you sow”. Similar maxims no doubt exist in every language because of the universal truths they contain.

Local leaders throughout Phuket are grappling for ways to deal with the damage from the floods and landslides that have been screaming at us in a number of areas over the past ten days.

Most if not all of this is the direct result of a combination of causes that include greed; corruption and dereliction of duty by local officials; shoddy design and construction – and some genuine stupidity. Almost all of the costly damage we are now suffering is self-inflicted.

Landslides are naturally occurring phenomena in the tropics. Unlike land masses in parts of the world that get an occasional scrape clean by glaciers, here in Phuket the ground beneath us has undergone eons of erosion, creating thick soil deposits that must eventually give way to the forces of gravity, water and time.

But this simple geologic fact is obviously misunderstood or completely ignored by many developers and the officials who oversee their work, who collectively conspire to re-create the Riviera on loose laterite so they can reap financial rewards.

It has only taken some heavier-than-average rainfall to expose their practices just as clearly as the exposed patches of soil they have created throughout the island.

In Patong, where the 80-meter restriction on building has been blatantly ignored, each deluge now results in flooding of key commercial areas, while landslides are a constant threat upslope.

While the debate over whether to bore a tunnel under Patong Hill droned on and an “iconic” new sign was being erected to greet visitors to that troubled city, officials turned cash-blinkered eyes to ill-advised construction and encroachment taking place in the same areas, including many that are so obviously well above the 80-meter limit.

Sadly, the response by provincial authorities to the man-made emergencies we now face has been as predictable as it is hopeless. With damage now officially estimated at 100 million baht, the province has announced that it only has half that amount to conduct repairs. Thus, it will approach the Highways Department in Bangkok for additional funding.

But a response from Bangkok may take some time. The Highway people there have more desperate priorities, with much of Thailand’s national road network now under water.

As for how any additional funds will be allocated, those decisions fall to each of Phuket’s three district offices – the same bodies largely responsible for allowing the problem to have developed in the first place.