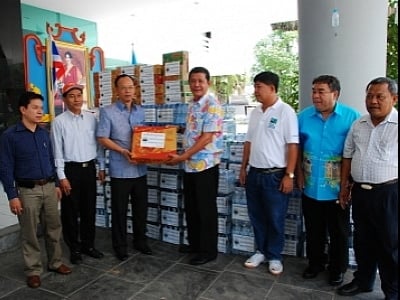 PHUKET: The flood-relief effort continues in Phuket, where local tuk-tuk drivers were among those donating boats and other necessities to those affected by the worst flooding in Thailand in decades.

“Thank you everyone who participated in this donation – thank you for showing your kindness. This shows that Phuket people don’t neglect those who are suffering and are in need. We’ll hurry to get these items to flood victims as soon as possible,” V/Gov Somkiet said at the donation ceremony at Karon Plaza.

Eleven of the boats were donated by vendors at Karon Plaza and two by the Kata-Karon Tuk-Tuk and Taxi Club.

Donations to the flood-relief effort may be made at any local administration organization in Phuket from Monday to Friday, 8:30am to 4:30pm.

Phuket Governor Tri Augkaradacha said, “We welcome any kind of donation, but after talking to governors of flooded provinces, they prefer to have cash.”

Phuket Provincial Office has opened a “Phuket Aid for Flood Victims” account with Krungthai Bank to accept monetary donations. The account number is 805-0-39733-5.