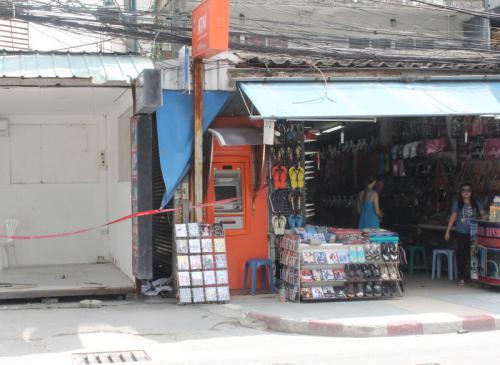 PHUKET: Police have identified the men who robbed a Phuket ATM on Tuesday and are seeking arrest warrants.

Based on CCTV images from a construction material store in Thalang, Phuket Police were able to identify the men purchasing supplies for the crime, which used a blowtorch to cut the back off the ATM.

“We started by looking at CCTV images near the ATM, and then broadened our search to shops selling the equipment needed to carry out a blowtorch break-in,” said Phuket Provincial Deputy Commander Arun Kawevatee.

The images show “more than one” light-skinned foreign man making purchases, separately, at the store. Col Arun declined to name what items were bought, but two gas cylinders and a pair of gloves were recovered at the ATM (story here).

The thieves made off with 220,000 baht, leaving 1.4 million baht in the bottom canister of the machine in a robbery that resembled the 1.6million baht theft of a Boat Lagoon ATM last month (story here).

“At this stage, we don’t know if the suspects are still in Phuket or not. We will ask the court to issue arrest warrants as soon as possible,” Col Arun said.