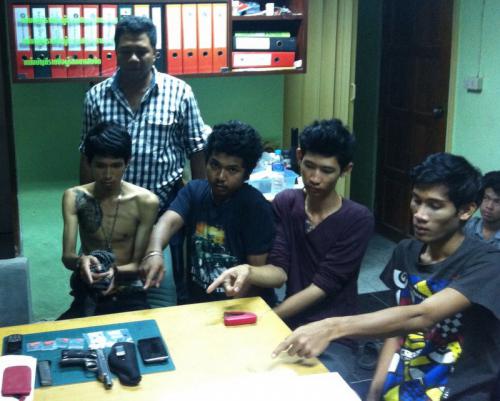 PHUKET: The arrest of one drug user in Patong on Monday morning allowed police to make an appointment with five other druggies later in the day.

Acting on the orders of Phuket’s top cop to arrest anyone suspected of drug use, officers in Patong approached Komsak Tongsin, 21, in front of a SuperCheap store on Phrabaramee Road because he “looked suspicious”.

Mr Komsak told police that he purchased the drugs from Sombat Wantong, 23, and provided the police with Mr Sombat’s telephone number, said Lt Col Somsak Tongkliang of the Patong Police.

“We called Mr Sombat and made an appointment to buy drugs from him at his house,” Lt Col Somsak said.

Once at the house, police were able to arrest Mr Sombat and three other men for possession of a Category 1 drug with intent to sell. Mr Sombat had 1.9 grams of ya ice (crystal methamphetamine); Peeraopong Sangmaneetaweesap, 21, had .5 grams of the drug; Jittakarn Thorpoon, 21, had .3 grams; and Chatree Geeratheeti, 21, had five ya bah pills and was illegally in possession of a .32 handgun.

In addition to the drug charges, Mr Chatree was charged for the illegal possession of a gun.

A sixth man, Jeenapan Sangmaneetaweesap, 20, was not found with drugs, but confessed to police that he had taken them and was charged with using a Category 1 drug.

All six suspects subsequently tested positive for drug use.