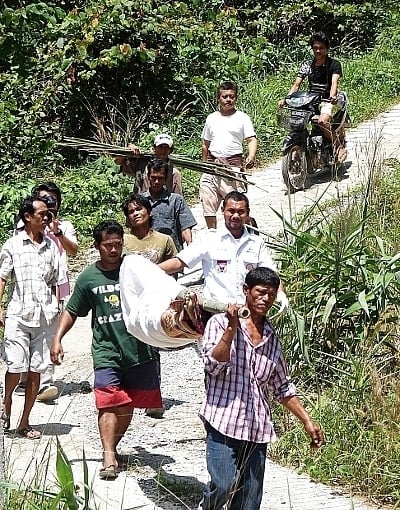 PHUKET: The body of a Burmese rubber tapper was recovered from a rubber plantation high above a public water reservoir in Phuket today.

Mr Sorapong, 45, died at about 11pm on Thursday after a month of fever, coughing and lack of appetite.

Friends and relatives used a makeshift bamboo stretcher to bring his body down a hilly three-kilometer stretch to the nearest road, the ring road around the Bang Neaw Dam, where it was received by Kusoldharm Foundation workers.

The body was then taken to Thalang Hospital for examination.

No police were present to oversee the process.

Mr Sorapong was a legally-registered worker who had lived in Phuket for 10 years and spoke Thai well, they said.

Despite the serious and protracted nature of his illness, he took only medicine bought from a pharmacy and never saw a doctor before he died.

Before moving to the rubber plantation about a month ago, Mr Sorapong had worked on various construction sites around Phuket, the son-in-law said.

Phuket YouTube girl “not dead’, but another woman’s body found