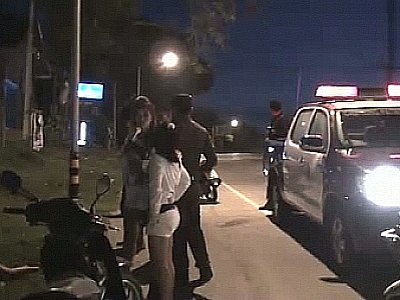 PHUKET: Phuket authorities have dismissed as inaccurate a video clip posted on You Tube today showing a woman lying beside a road in Rawai – presented by whomever made the clip as if she were dead.

“The woman certainly was not dead when our officers arrived in front of The Vijitt Resort,” Thada Suppawat, an emergency response officer at the Phuket Tourist Rescue Center in Chalong, told the Phuket Gazette this afternoon.

The rescue center was notified of the woman, later identified as 27-year-old Bangorn Srisod, lying beside the road at about 5.45am, he said.

“She was lying on the ground with a cut on her wrist,” Mr Thada said.

The cut looked self-inflicted, and not as if it were sustained in an accident, he added.

An ambulance was called and she was taken to Vachira Phuket Hospital in Phuket Town.

“People our officers spoke to said she had a fight with her boyfriend, with whom she lives near where she was found,” said Mr Thada.

“She was conscious at the time and she climbed into the ambulance by herself,” he said.

A nurse at Vachira Hospital today confirmed Ms Bangorn had been admitted to the hospital, but that a date for her release had yet to be set.

Meanwhile, however, volunteers at the Ruamjai Kupai rescue foundation based in Chalong today confirmed that the body of a woman was found in the hills about one kilometer west of Kwang Road in Wichit on Friday morning.

The body, clothed and covered with a red quilt, was found at Baan Teen Khao, the Gazette was told.

“The skin was yellow because it had been bathed in turmeric, which is a common practice for ethnic Mon to do with their dead,” the worker explained.

The rescue worker said that the woman likely died from a miscarriage, as her trousers were stained with blood in the groin area.

The body was taken to Vachira Hospital Phuket for further examination.