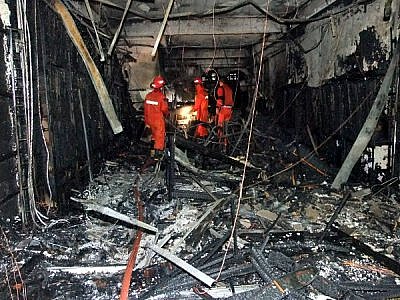 PHUKET: Fire ravaged a two-storey tailor shop and damaged other units in a row of shophouses on the Patong beach road, on Phuket’s west coast, early this morning.

Motorbike taxi driver Wirote Thongthep alerted the Disaster Prevention and Mitigation division of Patong Municipality of the blaze at about 3:45am.

Eight fire trucks and 18 officials from the division rushed to the fire, which they extinguished in about 30 minutes.

The tailor shop, Euro Boutique, is located on Soi Post Office off Thaweewong Road (the beach road) in Patong.

The Vayo Massage & Beauty Salon next door was also damaged in the blaze.

Taimoor Shahzad, owner of Euro Boutique, estimated the damage to be around six million baht.

As he surveyed its charred remains, Mr Shahzad, who lives in Phuket with his Thai wife and one child, told the Phuket Gazette that the shop was uninsured.