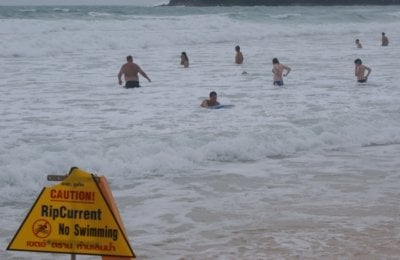 PHUKET: The drowning death of a 21-year-old British woman at Karon Beach over the weekend has left Phuket lifeguards frustrated over the failure of foreign tourists to heed their warnings not to enter the surf when red warning flags are flying.

Rebecca Callaghan, from Evesham in Worcestershire, was in Phuket with her boyfriend as part of a holiday that took in Australia and Indonesia as well as Thailand. She was due to start a university degree in September.

Lifeguard station chief U-tane Singsom said Miss Callaghan arrived at the beach around 5pm and entered the surf despite visible red flags and a verbal warning.

Her boyfriend rented a body board and waded out, followed by Miss Callaghan who entered without an aid.

Despite staying in shallow waters, she was pummeled by large waves and went under.

Lifeguards pulled her out and aided by a vacationing nurse, Savanna Sorensen, performed CPR before she was taken to Patong Hospital.

In an interview with the Evesham Journal, her family this week paid tribute to their “special daughter”.

Her mother Rosie told the Journal that Miss Callaghan “would always be remembered for her bubbly and caring nature”.

Her brother said: “We would like to say to those who knew her to remember Becky how she was – to think of her when they were with her and hopefully that was a time when they were happy and laughing.”

Her funeral was expected to take place in Bengeworth in England.

Around the same time as the tragedy that claimed Miss Callaghan’s life, two Thai teenagers had to be rescued by lifeguards at Nai Harn Beach.

They were saved by beach guards. Mr Chaiphoom was taken to Vachira Hospital while

A fourth incident took place at Kata Beach the same day when a Korean tourist, Liu Gang, entered the surf around 5:20pm despite red flags and being warned by lifeguards.

After being hit several times by large waves, an exhausted Mr Liu had to be rescued and taken to Bangkok Hospital for treatment.

Mr U-tane, who is responsible for Karon Beach, Kata Beach and Kata Noi Beach, said that during the rainy season the beaches were perfect for surfing – but not swimming.

“To play in the water with a surfboard is not that dangerous because the surfboard is a floating device helping you stay on the water’s surface. But to play without any board is very dangerous,” he said.

All four accidents on the same day had one thing in common: tourists ignored water safety signs, flags and lifeguards’ warnings, he said.

Mr U-tane said he was frustrated when a drowning took place as it was not only the victim who was at risk, but also the lifeguards trying to save them.

“It is very difficult to help people in the water with big waves. When lifeguards warn tourists not to swim and red flags are flying, the tourists get angry and use bad words. But when a drowning really happens and someone dies, lifeguards are blamed for not doing their duty,” he said.

Work on new Phuket incinerator to start next month