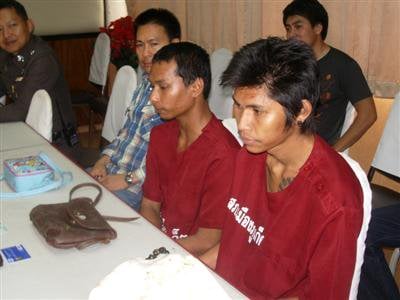 PHUKET: A police dragnet led to the arrest of three young men wanted in connection with numerous cases of armed robbery and sexual assault in Phuket.

All are Phuket residents in their early 20s.

Mr Noppon and Mr Chaiwut have been charged on multiple counts of armed robbery, assault and sexual assault.

Police questioning of the pair led to the arrest of Mr Wittawat, who was charged with accepting stolen goods.

After receiving complaints about the pair’s attacks, at around 1am Wednesday police set up checkpoints, one of which intercepted Noppon and Chaiwut on a motorbike in front of the Phromphan residential estate in tambon Rassada.

Police gave chase after the pair ignored an order to pull over and sped off instead.

Once caught, the pair confessed to numerous charges of theft and assault, and at least one case of sexual assault.

The pair’s alleged modus operandi was to cruise around on the motorbike at night looking for young women whom they would then threaten with a knife or electroshock weapon.

They robbed the victims of their possessions and in many cases sexually assaulted them before riding off, police said.

Police allege the pair are responsible for at least six cases of robbery and aggravated assault.

The first robbery allegedly took place at 1:45am on May 10 on the access road to SBAC Vocational College, opposite Bangkok Hospital Phuket in the Samkong area of Phuket Town.

On May 27 the pair allegedly stole a motorbike at 3:30am on Pattana Thongthin Road in Wichit.

At about 2:30am on May 29, they robbed two people near the Phuket Rajabhat University junction on Thepkrasattri Road in Rassada, police said.

Two more victims allegedly fell prey to the men at 4:30am on June 5 on Soi Phasuk in Phuket Town.

They reportedly struck again on June 12, kidnapping a victim on Thepkrasattri Road in Phuket Town and bringing her to a secluded beach near the access road to the Khao Khat Viewpoint in Wichit, where they allegedly sexually assaulted her.

Describing the two men as a menace to society, Commander Pekad said the men will be prosecuted to the full extent of the law in every case.

Police are still waiting for some victims to identify the men and are asking other victims who have not reported similar attacks to come forward.