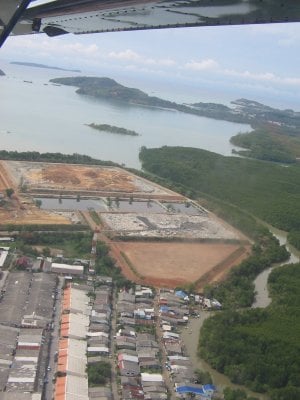 PHUKET: Phuket City Mayor Somjai Suwansupana has confirmed that the construction of Phuket’s long-awaited second solid waste incinerator is to begin next month, while a 43-million-baht project to improve the surrounding landfill is now complete.

“Construction of the new plant was delayed because the original plans had be to modified for the incinerator to pass the Environment Impact Assessment (EIA) process, but now they are ready and construction will begin in late July. It should be finished by December next year,” Mayor Somjai told the Gazette.

According to a Phuket City Municipality press release issued on June 5, the 43-million-baht project has just been completed and will help alleviate Phuket’s mounting solid waste problem.

Residents on the island currently generate about 500 tonnes of trash daily, but the existing incinerator at Saphan Hin can only dispose of about half that amount.

The rest goes into five landfill plots covering around 120 rai around the incinerator. In use since 1993, the landfill already harbors about a million tonnes of trash up to 15 meters thick in some locations, five meters below the ground and 10 meters above. Both the incinerator and landfills are run by Phuket City Municipality, but must accept trash from all 20 local administrative districts on the island.

The landfill improvement project, just completed by Boonchai Panich (1979) Co Ltd, took 400 days to finish from its starting date in April last year. Workers extended three landfills to boost their capacity, while sealing off a fourth plot that was full to capacity and re-arranging a fifth plot so it can accommodate more waste. The project also included the installation of a drainage system and waste water-treatment plant.

The project ended May 6 this year, but despite boosting the total landfill capacity by an extra 110,000 tonnes, authorities expect the entire landfill to be filled to capacity within about one year.

That stark realization prompted the Phuket Provincial Trash Management Committee to invoke a new policy requiring all 20 local administrations to ensure trash is separated at the point of collection, thereby reducing the volume of trash that reaches the incinerator.

Brought into effect at a meeting on May 27, the new policy was coupled with a directive ordering local administrations to form a provincial Nature and Environment Protection Volunteer Network with “branches” in each of the local administrations’ areas of authority. The network is to teach and promote trash separation and recycling to local residents.

Each local administration is also to set up designated trash-separation centers in their areas of control.

Under the new policy, residents are to separate their trash into recyclable materials, organic waste and hazardous materials, all ready for separate collection by local garbage men.

Penalties for residents not separating their trash are still being considered, as are any new fees that may be introduced to cover the cost of fitting out the garbage trucks so that trash can be collected in a way that separation is maintained.

A big problem in the past has been that trash sorted at curbside has mixed back together by garbage men during the collection process. The problem reduces efficiency at the incinerator because organic waste contains a great deal of water vapor, which lowers the burning temperature and results in lost electric power production, incomplete combustion and higher levels of chemical pollutants released into the atmosphere.

The presence of wet waste, particularly common during the rainy season, causes the same problems.

Local administrations are now studying what penalties and fees may be levied for non-compliance with the new policies and will present their findings to the Phuket Provincial Trash Management Committee for further consideration.

English out of World Cup in Phuket