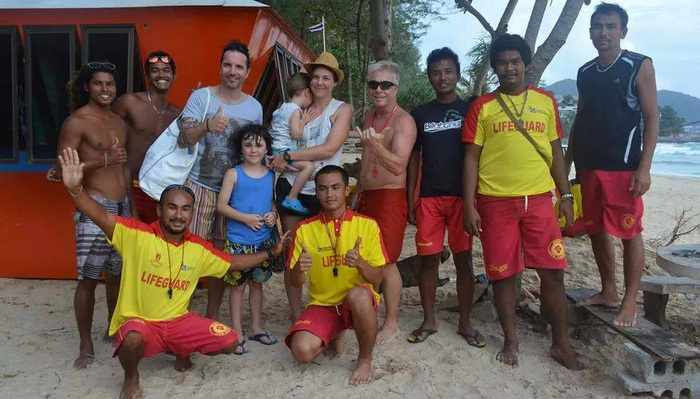 “A family of three from Belgium, including their three-year-old son, along with a fourth victim, could have all lost their lives yesterday in a space of a few minutes,” a Surin Beach lifeguard told the Phuket Gazette.

Despite average-looking surf and sunny conditions, all four were caught in the rip current.

“They had ventured into the ocean in the worst possible spot, passing a steady row of red warning flags and multilingual signs, all indicating that it was a no-swimming zone and that dangerous rip currents were present in the area,” the lifeguard said.

Lifeguards spotted the four just north of “Elephant Rock” – well outside of the safe swimming area – at about 4:30pm. They were struggling against the current to make it to the shore, while being steadily pulled out farther.

“One man was trying to hold a small baby while fighting the fast-moving water,” the lifeguard said.

“With the child’s mother being swept the farthest out, onlookers watched as three lifeguards dove into the ocean and began the process of securing them and assisting them back to shore… The lifeguard assisting the man and baby was whistling nearby swimmers out of the water, even as he tended to the two in distress.

“Lifeguards were pounded by the surf and dragged by the current for nearly five minutes as they pulled the victims out of the rip current and back to shore.”

Two other full-time lifeguards and a volunteer at the scene assisted the rescue from the beach.

All four victims were safely recovered without serious injury.

“Everyone will make it home safely from Surin today [Sunday], so no matter how difficult the rescue was, it was definitely a good day in the end,” one lifeguard said.

A three-minute walk down the beach from where the family entered the water, large red-yellow flags marked an area safe for swimming, which beachgoers had been using for hours without incident, the lifeguard noted.

“During the rescue, if another victim needed assistance at the south rocks, we just wouldn’t have been able to get there in time”, one of the rescuers said. “We are stretched fairly thin.”

Adding to the woes of Surin Beach lifeguards, recent monsoon weather has devastated the coastline, destroying the lifeguard tower and washing away a portion of the road that runs the length of the beach.

“Temporary guard quarters have been brought in, but the height of the old tower provided a much better view and platform to launch rescues from,” one lifeguard told the Gazette.

“There is a dire need for a proper tower and headquarters. The current temporary structure sits at ground level, not nearly high enough to provide an unobstructed view of the entire beach.”

* The Gazette originally reported the fatality-free record as five years. However, German Marek Klein, 51, drowned on May 28, 2010 (story here).