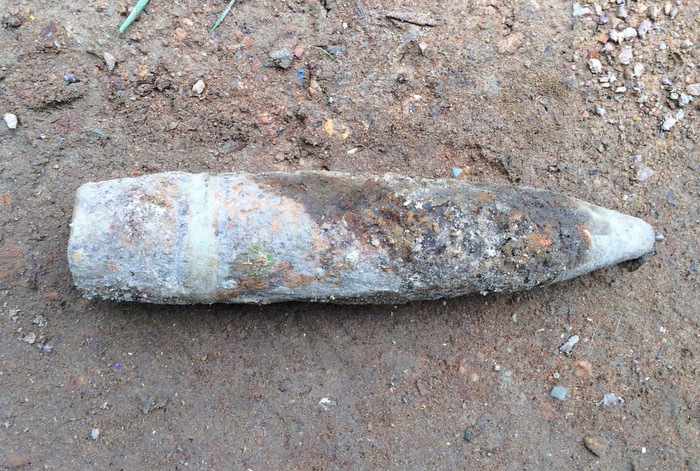 PHUKET: Workers at a construction site in Phuket unearthed an unexploded artillery shell on Friday.

However, Phuket City Police weren’t notified of the find at the apartment complex building site in Rassada until yesterday.

“Once we realized what it was, we called in the Phuket Provincial Police Explosive Ordinance Disposal (EOD) to promptly recover it and dispose of it,” said Capt Wichat Kongtawai of the Phuket City Police.

“Experts confirmed that it is a 105mm artillery shell,” another officer at the scene told the Phuket Gazette.

Sopa Sae-hao, owner of the apartment block under construction, initially thought the ordnance was an old oxygen tank for welding.

“I told my workers to put it aside while they kept working,” she said. “However, while we were cleaning up the site yesterday, we thought we should call the police.”

Ms Sopa was thankful that none of her workers tampered with the live round.

“The results could have been tragic,” she said.

In April, seven people died and 20 were injured when workers at a scrapyard in Bangkok attempted to open what they didn’t realize was an aerial bomb from World War II (story here).

An unexploded ordnance is a rare find in Phuket, though in May, local fisherman in Krabi discovered a WWII Japanese torpedo with a potential blast radius of one kilometer (story here).

The 5.4-meter-long torpedo contained 200kg of explosive charge and weighed 889kg at the time of production. It was of the same type of torpedo bought by Thailand in 1937 from the Japanese for 10,000 baht apiece.

Officers from the Royal Thai Navy ordnance-disposal unit recovered the torpedo and safely disarmed it at a nearby island (story here).