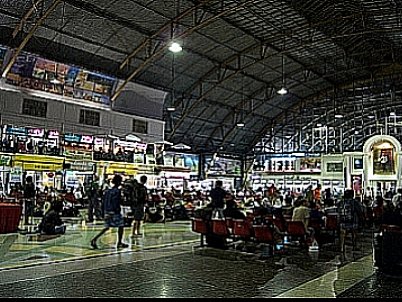 PHUKET: After a month of Bangkok suffering from one of the worst floods to hit Thailand in the past century, bus services to Phuket and bus and train services to other destinations in southern Thailand have returned to normal.

As of yesterday, however, buses departing Bangkok to Phuket and other destinations in the South returned to Sai Tai Mai.

“There are not as many [passengers] here as there used to be, but we are fully operational,” said a public relations officer at the terminus.

“The terminal itself was not flooded, but water surrounded the terminal, which meant that small vehicles could not drive through the area. That is why we can reopen the terminal so quickly. We don’t have to clean up. All we have to do is announce that we are now officially open,” she added.

The officer said that some roads around the bus station were still flooded. “But it is not as bad it was. Small vehicles can now go through the area,” she added.

Meanwhile, train services from Bangkok to destinations in the South, including Surat Thani, where many tourists disembark and continue on to Phuket, have resumed at Bangkok’s central Hua Lampong Station.

“Bang Sue station was flooded and we are unable to operate the trains to the South from Hua Lampong. We had to operate our southbound trains from Nakhon Pathom Station to the south [of Bangkok] for a month,” said State Railway of Thailand public relations chief Nuan-anong Wongjan.

“I am happy to announce that all trains to the south from Hua Lampong Station are now operating as usual,” she added.