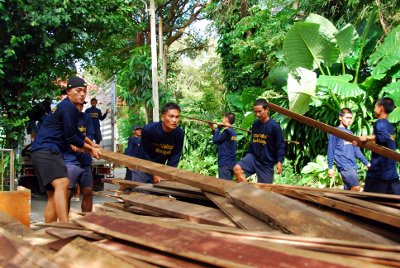 PHUKET: Phuket prisoners today helped to clean up Wat Charoen Samanakit, located behind Phuket Provincial Hall, in order to make merit for HM The King Bhumibol Adulyadej ahead of his 84th birthday on December 5.

The 40 prisoners involved in the cleanup are all under consideration for amnesty under His Majesty’s annual birthday pardons, explained Phuket Prison Director Rapin Nichanon.

“The 40 prisoners working today are among the 200 plus people asking for amnesty. I have already filed their names to request amnesty from HM the King. If nothing goes wrong, the approvals should be announced before December 5,” he said.

Today’s efforts were part of a Ministry of Justice national project, from November 21 to December 5, to clean flooded-affected areas and to help flood victims, Mr Rapin explained.

“Although the floods didn’t affect Phuket, we have taken part in the project by sending out prisoners to help clean the community,” he said.

Anupong was sentenced to two years and six months imprisonment on drug charges. He has already served six months.

“If I get amnesty it will be very kind of His Majesty. I promise not to be involved with drugs ever again,” Anupong said.

“For those doing bad things or committing crimes – please stop. It isn’t worth the punishment you will receive if you are caught. You will feel guilty for the rest of your life,” he added.