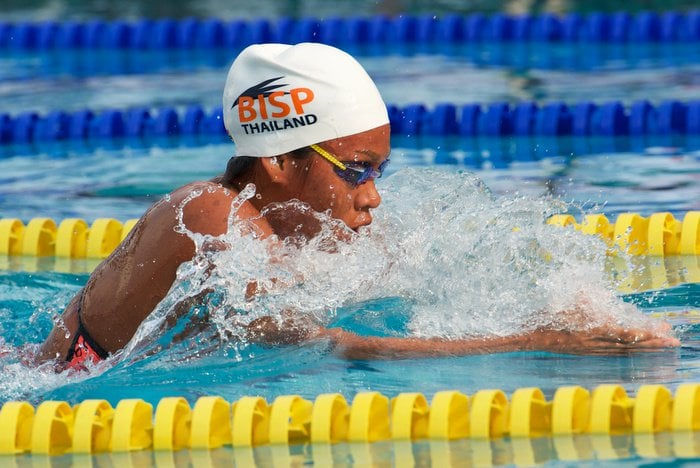 PHUKET: When the BISP / JSA Swim Academy at British International School Phuket first took to the pool in August 2013, the team had five international swimmers on scholarship, four swimmers from the school’s Flying Fish club team and high hopes.

Heading into 2015 the team, which has grown in numbers (nine girls and eight boys), have already racked up new national open and international age-group records and two have qualified for the 2016 Olympic Games in Rio de Janeiro.

“We currently have 17 international swimmers in the program which will grow to 25 in August with new swimmers attracted to the school and commencing in the forthcoming school year. We have a very unique situation here. The school supports our athletes’ ambitions both sporting and academic, by offering an environment where students receive a holistic approach to learning and training. BISP strives to provide an experience that enables the swimmers to access collegiate opportunities post high school whilst excelling in sports, with assistance in sports nutrition and strength and conditioning as part of the program.

“A lot of schools are starting to attempt to combine sporting scholarships with academics, but are not as committed as we are, and that’s all due to the vision and implementation of the Academy idea from Headmaster Neil Richards.

“Mr Richards strongly believes that sports build character, and the discipline and skills involved in this sporting and academic balance will help our students achieve their goals during their lifetime.”

“Eing is one of our strongest female swimmers,” Simon said. “She made the finals in the 200-meter breaststroke at the 2014 Asian Games and has already qualified for the 2016 Olympics in the 200m individual medley (IM). She has until next June to qualify and I expect her to qualify in up to five events over the coming 12 months.”

“Fu Kang has qualified in the 100m breaststroke and recently broke the Malaysia record,” Simon explained. “Fu Kang is looking to catapult himself into the upper echelons of World Junior swimming over the coming year and it is expected that he will add one more event to his 100m breaststroke qualification in the build up to the Olympics.

“These are not the only possible qualifiers for next summer’s Olympic showcase. We have a number of other top age group contenders that are knocking on the door of the Olympic ‘B’ qualifying standard, and with things going our way, we could have up to seven on their respective international teams at the ultimate sporting event. One of the possible qualifiers is Filipino Roxanne Yu, 18, who will be graduating from BISP with an IB Diploma this summer, and has been offered a scholarship in the United States to Miami University, Florida.”

Roxanne has established several national records in the backstroke events during her time at BISP and has been the team’s senior figure and mentor for younger swimmers joining the program.

With swimmers already qualified and selected to represent their home countries at the World Championships in Kazan, Russia, at the end of July, the World Junior Championships in Singapore in August and the Commonwealth Youth Games in September, the team certainly has plenty to train for this summer. However all attention is currently focused on the 28th South East Asian (SEA) Games in Singapore which will be held from June 6-11.

“Qualified for this event are Eing, Wong, Roxanne, Raine Gavino [Philippines] and Chantal Liew [Singapore],” Simon explained. “Between the five of them, they will compete in 15 races, plus the 4x100m medley, 4x100m freestyle and 4x200m freestyle relays. Hopefully, we’ll be in 15 finals with a strong possibility of bagging a bounty of medals.”