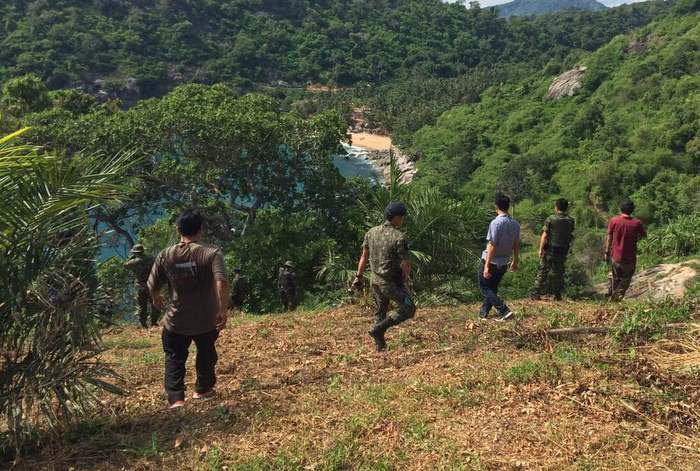 In February, 46-year-old Chalothorn Chotianan, whose family claims ownership of the land, said that he was not aware of anyone trying to charge visitors for using the sands (story here).

“Everything is fine. I am not mafia and the land around the beach is legally my property. I have all the documents to prove it,” he told officers at the time.

Further investigation into the land documents for the 18 rai of property which provides the only land access to Nui Beach led government officers back to the property yesterday. Mr Chalothorn’s father, Thana Chotipanang, attempted to present the same documents as proof of ownership.

“The KorSor 1 provided by Thana Chotianan to obtain a NorSor 3 for the 18 rai of property was for a completely different property, which voids the NorSor 3,” explained Lt Somphop Kamthana of the Royal Thai Navy Third Area Command.

“We have collected enough evidence, and have now asked that the Phuket Agricultural Land Reform Office [ALRO] send the evidence to Karon Municipality, so that they can present the owners with an eviction notice.”

The NorSor 3 was voided by the Supreme Court, confirmed Lt Somphop.

During the raid, officers found five buildings used to provide services to customers on the beach, as well as tents, fitness equipment, tables, chairs and an unlicensed jet-ski, confirmed Lt Somphop.

“If they fail to remove the buildings, we will demolish them and charge them for land encroachment,” he said.