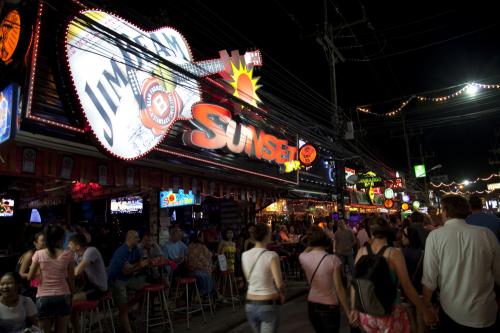 PHUKET: The BBC has denied claims that it wasted more than 7 million baht on a show in Thailand after an episode was reportedly scrapped.

The partying allegedly came at the British license fee payers’ expense – as UK residents must pay an annual license fee in order to watch TV – to the tune of 7 million baht.

The news reports claimed a gap was left in the filming schedule after one of the participants of the undercover show pulled out at the last minute.

However, the BBC yesterday said there was “no truth” to the newspapers’ claims.

“No episodes of Sun, Sex and Suspicious Parents have been axed in this series and therefore there is no truth to the claim that we have had to write-off 150,000 pounds,” a joint BBC and RDF TV statement said.

The show Sun, Sex and Suspicious Parents follows young people on their first holiday abroad alone, unaware their parents have secretly travelled to the same destination to spy on them.

Commissioned by the BBC, the program is made by independent production company RDF, which uses its own crew.

The BBC said in this instance two sets of friends had been due to travel to Thailand in June to take part in the show; however, one pulled out due to personal reasons.

Filming continued with the other group of friends as planned by the TV crew – who had flown out ahead to set up the production – while a new group was recast.

“Production schedules were amended due to a change of contributors but the production team continued to work and film other material for the series,” said the joint statement.

The BBC added it was untrue to say there was a 10-day break in filming or that it was an “all-expenses-paid jaunt”.

It said all scheduling and budget arrangements on location were decided by RDF – whose crew were allocated five days off during the 34-day shoot – and all leisure expenses were paid by the crew themselves.

“As with all productions, staff work very long hours, with the right to some time off,” the statement continued.

“RDF followed all BBC guidelines whilst filming the series and it will deliver in full, and for the original BBC program budget.”