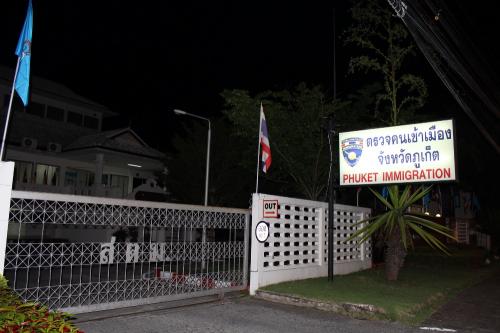 PHUKET: Phuket police have taken nine more Rohingya men back into custody, and back to the immigration detention center they had escaped from early on Saturday morning (story here).

“I am sure they are still in Phuket because our officers continue to round them up,” Col Sanchai said.

Of the 38 men held at the Phuket Immigration detention center (map here), 36 escaped last weekend by gaining access to the roof and jumping over the center’s wall.

“One group escaped by breaking through a bathroom wall, going into the next room and breaking through the ceiling to the roof. Then they jumped across the wall and ran away,” Col Sanchai explained.

“A second group broke the bars of their detention room, went into the next room and also got access to the roof and jumped over the wall,” he added.

Immigration officers learned of the breakout at about 3am.

“Actually, all 38 of them tried to run away, but our officers caught two of them before they got away, so only 36 managed to escape,” Col Sanchai said.

“I believe their escape is due to stress. They’ve been detained in the center for a long time,” he added.

“We have tried to give them activities to help lower their stress, but we can’t do them often because we don’t have enough officers to monitor them,” Col Sanchai explained.