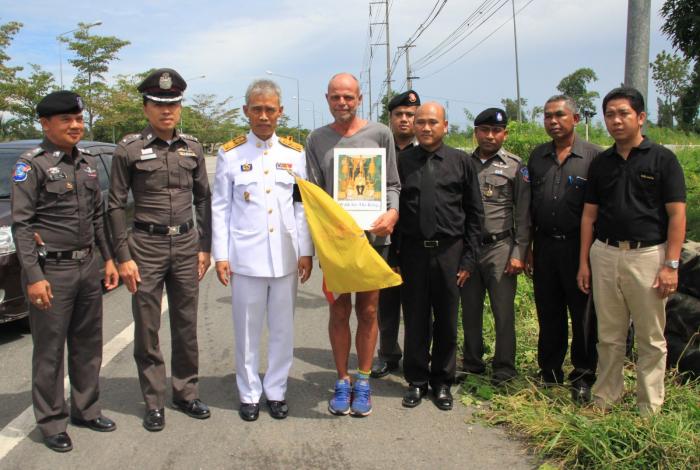 SURAT THANI: Australian tourist David Hammill hopes to reach Bangkok on foot before his visa runs out, after setting off on Thursday from Surat Thani armed with a 28-day visa extension so he can make the 650km journey as a tribute to the His Majesty King Bhumibol Adulyadej.

Walking with a portrait of HM the King in hand, the 46-year-old plans to join mourners at Suan Luang and the Grand Palace in the capital to pay his respects to the Late Monarch.

Surat Thanni Governor Uaychai Innak met Mr Hammill while he was taking a breather at a small cottage in the province’s Kanchanadit District.

“His right foot was sore after walking about 50 kilometers already but otherwise he was in good health,” said Governor Uaychai.

The generous governor and provincial officials even reached into their own pockets to help Mr Hammill along the way with a 4,000 baht donation.

Kanchanadit Highway Police also offered Mr Hammill accommodation for the night but he refused and went on his way.

Governor Uaychai confirmed that Mr Hammill’s visa initially allowed him to stay until October 19 but he was granted an extension of stay until November 16.

Married to the mob: wife implicated in van driver shooting