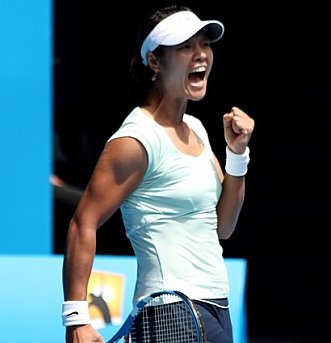 PHUKET: Li Na stamped her name on sports history on Saturday by winning the French Open at Roland Garros, becoming the first tennis player from China to win a Grand Slam singles final.

A straight sets victory 6-4, 7-6 over defending champion Francesca Schiavone from Italy was completed in less than two hours by the world number seven.

Li was beaten by Schiavone in the 2010 French Open semi-final, and given the Italian’s abilities on clay; odds did not favor the 29 year old Chinese star’s title bid.

Having lost to Kim Clijsters five months ago in Melbourne at the Australian Open final, Li’s nerves for the big game could have come back to haunt her, but it was Schiavone’s own errors that put paid to hopes of retaining the Coupe Suzanne Lenglen.

It took Li just 37 minutes to convincingly close out the first set, losing only six points from her service games.

With the score tied at 4-4 in the second set and Schiavone showing form, the Philippe Chatrier [center] court crowd of over 14,800 was expectant of a third and deciding set.

The Italian was unable to meet those expectations and Li ended the contest with a magnificent seven points unanswered in the second set tie-break.

The newly crowned champion married her coach Jiang Shan in 2006, which was vociferously objected to by Chinese tennis officials. As a result of the tension and reportedly having to pay 65 per cent of prize money to the government, Li quit the national team in 2008 and became a free player.

It seems her rebellious nature has been overlooked now that her success has inspired national pride.

“Li Na is hailed nationwide as an idol on a par with NBA superstar Yao Ming, following her historic victory in Paris that made her the first Asian tennis player to lift a grand slam singles title,” a statement in China’s state run news agency said on Sunday.