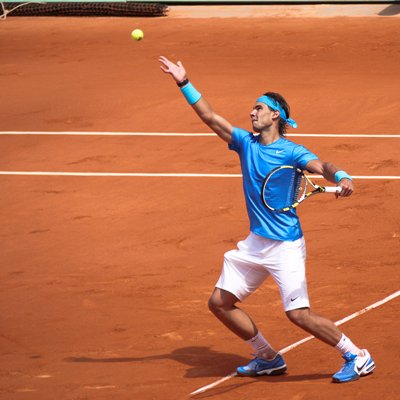 Nadal won the Coup des Mousquetaires [name of the French Open trophy] at his first attempt in 2005 aged 19 and made the grand slam event his own for the next three years. He relinquished his crown with a fourth round loss to the throne’s pretender, Robin Soderling, who eventually lost to Federer in the 2009 final.

In 2010, Soderling once again usurped a defending Roland Garros champion in the fourth round by defeating Federer. But the Swedish heir apparent was not as fortunate in the final, losing to a resurgent Nadal 6-2, 6-4, 6-2.

Federer started the final well with strong serves and went three games up before Nadal finally held a service game in the fourth.

The Swiss 29–year–old held his serve in the fifth to take a 4-1 lead, and after Nadal won a second service game, Federer took game seven to leave him one game away from capturing the first set.

Looking to equal Bjorn Borg’s French open record, Nadal regrouped, and recouped four games. At 40-30 in game 12, the Spanish number one seed curled a set winning forehand past Federer to put his record bid back on track.

Nadal’s winning streak of seven games was ended by a Federer hold of serve in game three of the second set. Crushing baseline shots from the Spaniard neutralized the Swiss challenge, but Federer showed his vast experience to claw the set back to 5-5.

Two held service games and the second set went to a tie-break. Nadal raced to a 4-0 lead, and then a two set lead by winning the tie-break 7-3.

Federer had to win the third set, and he did, digging deep to win 7-5, proving his mental toughness and why he is considered the sports’ greatest ever player.

The combination of exertion to claim that third set and being pushed around the court by Nadal’s aggressive groundstrokes throughout, ended the match as a contest. Federer held his serve only once, and the title was deservedly retained by a jubilant Nadal, taking a 6-1 victory in the fourth set.

Although defeated on this occasion, a defiant Federer stated he “would see him [Nadal] next year.”

Winning over one million euro, a magnanimous Nadal said his opponent had played very well and thanked him for a great game.

Nadal’s grand slam wins now total 10, six of those coming from Roland Garros, and a chance this year to emulate his 2010 season of French Open, Wimbledon and US Open titles.