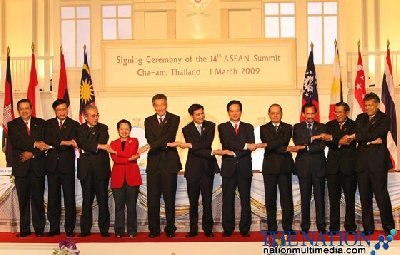 PHUKET CITY: The 15th Asean Summit meeting in October will take place in the twin resorts of Cha-am and Hua Hin, not Phuket, the government has confirmed.

With the island’s successful hosting of the Asean Foreign Ministers’ Meetings at the Laguna Phuket resort complex in Cherng Talay last month, all seemed on course for the Asean summit to take place in Phuket.

That changed on Thursday, when Foreign Minister Kasit Piromya said the proceedings would be moved to the twin resorts of Cha-am and Hua Hin, on the Gulf Coast.

Mr Kasit cited the fact that the summit coincides with Phuket’s annual Vegetarian Festival, from October 18 to 26 this year, as a reason for the change.

Two days later, however, Prime Minister Abhisit Vejjajiva said the move had not been finalized and that the government would name the location ‘later this week’.

This morning, Mr Suthep finally confirmed Hua Hin and Cha-am as host venues for the event, set to take place from October 23 to 25.

The Foreign Ministry, which is responsible for planning the summit, cited the successful hosting of the 14th Asean Summit earlier this year as proof that the resort town could provide adequate security.

That summit was moved to Hua Hin from Bangkok by the government out of fear that red-shirt protesters on the streets of the capital could disrupt the proceedings.

The fact that Royal Thai Police security experts toured Phuket was never a guarantee that the island would be named as the summit host, he said.

The issue was a hot topic at a press conference given by Phuket Governor Wichai Phraisa-ngop at Phuket Provincial Hall yesterday morning.

“In the meeting with officials on Sunday night, the prime minister said Pattaya was also vying to host the proceedings, but that Asean members had lost confidence in that town. Also, it was mentioned that Hua Hin is not a very international destination,” Gov Wichai told the press.

The 15th Asean Summit, scheduled to take place in Pattaya over the Songkran holidays in April, had to be aborted when red-shirted anti-government protesters stormed the host venue, with some delegates needing to be airlifted to safety from its roof.

Gov Wichai admitted that hosting the Asean summit during the Vegetarian Festival would have been problematic due to large crowds, traffic and the widespread use of firecrackers during street processions.

Noting the bomb scare at Ao Por during the Asean Ministers’ Meeting, Gov Wichai said the proliferation of firecrackers on the island during the festival could cause headaches given the highly sensitive explosive detection technology used for security.

“It’s a shame that the Asean summit could not be hosted by Phuket, as it would have been of great benefit to the province. We asked Asean secretary general Surin Pitsuwan to postpone the conference, but the schedule was already set and foreign delegates had already confirmed their attendance on those days,” he said.