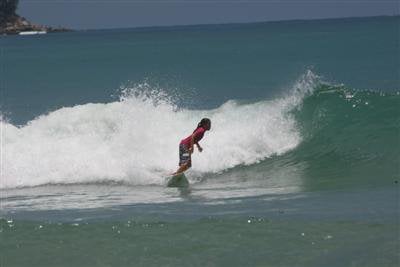 KAMALA, PHUKET: Eleven-year-old surf sensation Annissa Flynn stole the show on the final day of the King of the Jungle 2009 Quiksilver Thailand Surf Series event on Sunday, claiming both the women’s open and groms divisions on a great day of competition at Kamala Beach.

Kata-based Flynn, who learned how to surf just two years ago, successfully defended the groms title she claimed at the Monsoon Riders event in Kalim Bay, before stylishly defeating all-comers in the women’s final.

In the other divisions, Australian Michael Anthony narrowly pipped Nopphasit Buanchai and defending champion Ekkarat Sriden in the prestigious short board final, while Preecha Takira recorded the day’s highest overall two-wave score with his long board.

For complete results of the exciting competition, read the hard copy version of the Phuket Gazette that hits news stands on Saturday.

Asean summit not coming to Phuket