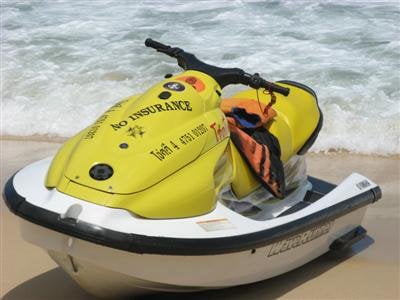 PHUKET: Australian diplomats regard the problem of jet-ski rip-offs in Phuket so seriously they have complained to the prime minister, Phuket Governor Wichai Phraisa-ngop said yesterday.

As a result, Deputy Prime Minister Suthep Thaugsuban has ordered a thorough investigation into scams on the island, particularly those involving jet-skis and motorcycle taxis, Gov Wichai said.

There are about 300 jet-skis on five beaches in Phuket, some of which have fake registration documents, he said.

The typical Phuket scam runs like this: a tourist rents a jet-ski at the beach. When they return the jet-ski, the operator claims it has been damaged and charges the tourist an exorbitant amount for repairs.

Mr Grigson said that every year, a huge number of Australians come on holiday to Phuket, with most of them having a great time.

The thing that caused the most problems was jet-ski scams, he explained.

Motorcycle taxis were also cause for concern, Gov Wichai said.

Some motorcycle taxi drivers ride off without returning tourists’ change, he said.

“Tourists are falling foul of these scams and complaining to the government and their embassies. Although the number of scams is small, the damage done to the island is great,” Gov Wichai said.

Fees demanded to fix ‘damaged’ jet-skis are typically inflated by 30 percent to pay officials to turn a blind eye to the scammers, he said.

The work of the government officials concerned would come under close scrutiny and every related agency would be contacted in the next week, he said.

There will be a meeting of all those concerned in which measures to fix the problem would be hammered out.

Such measures would include strict enforcement of the law, including limiting the number of jet-skis in each area to existing quotas.

It appeared a number of operators were exploiting a legal loophole, however, by using jet-skis in Phuket that were registered in other provinces, Gov Wichai said.

The jet-ski problem has existed for years in Phuket, where several people have died in jet-ski accidents, including minors.

Technically, it is illegal for any person to operate a jet-ski without a Thai captain’s license, but no governor has ever sought to enforce this rule as a way of dealing with the problem.

Asean summit venue to be finalized on Monday

Asean summit not coming to Phuket