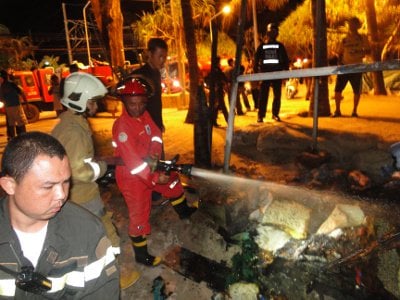 PHUKET: Police do not suspect arson caused a fire on Patong Beach last night that destroyed about 13,000 baht of sun loungers and beach umbrellas.

Patong Police Duty Officer Pratueng Polmana told the Phuket Gazette that he received a report of a lifeguard tower on Patong beach being ablaze at about 12:05am.

Patong Municipality firefighters rushed to the scene and extinguished the fire within 10 minutes.

“The fire destroyed beach chairs, beach mattresses and beach umbrellas that were stored under the lifeguard tower. The damage is estimated to be about 13,000 baht.

“After questioning the vendor whose materials were destroyed, I do not think it was arson. He said he that he has no conflicts with anyone,” Maj Pratueng explained.

“I cannot say exactly what caused the fire until the results of the forensic examination comes out, which is expected to be within one week,” he added.