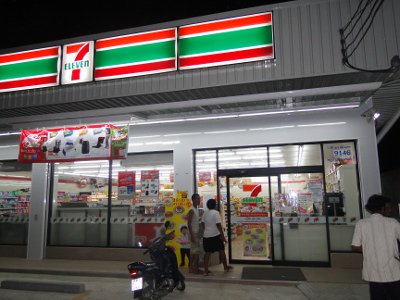 PHUKET: Phuket Police are searching for a man who, armed with a full-length scythe, robbed a 7-Eleven in Thalang last night.

The 19-year-old cashier on duty at the time of the robbery told police that a man wearing a balaclava entered the store, located near the Phanason Village residential estate on Thepkasattri Road, at about 10:45pm.

“Although she could not see his face she estimated the man was about 25 years old,” said Lt Col Watcharin Jiratthikanwiwat of the Thalang Police.

“He was about 170cm tall. He wore a white jacket and white pants, and was carrying a one-meter long scythe when he entered the 7-Eleven,” said Lt Col Watcharin.

The man pointed the weapon at the cashier and demanded the money from the cash register.

“The cashier was very scared, so she grabbed the money from the drawer, around 2,600 baht, and gave it to him. After he received the money, the man ran away,” Col Watcharin said.

The staff and other people in the store during the robbery told police that the man fled on foot.

“They could not say which way the man went. They were frightened, and the CCTV camera in front of the 7-Eleven does not cover wide angle, so we cannot tell which way he ran,” Col Watcharin explained.

After searching the surrounding area for an hour, officers found a scythe believed to have been used in the robbery dumped beside the road near the entrance to Soi Ban Liphon Hua Han.

“I believe the robber lives in the area. He dumped the scythe not far from the 7-Eleven and he did not use a getaway vehicle, so his place might not be far from here,” Col Watcharin said.