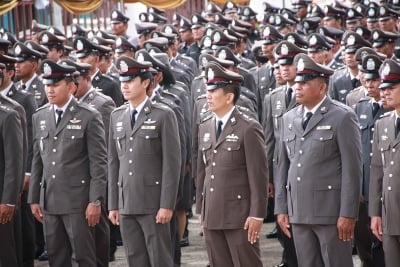 Phuket Governor Maitree Intusut, who presided over the ceremony, told the officers in attendance, “I would like all police at every level to give their utmost in the practical application of the government’s policy and strategy to suppress drugs and crime.”

Governor Maitree said that the public was well aware that every Royal Thai Police officer works hard to serve the people and that people had confidence in police to resolve their troubles.

However, he added that in order to succeed in their duties, police officers needed cooperation from the people, who could assist police efforts by helping to locate and identify criminals and inform police of criminal activities.

As part of the proceedings 32 officers from various departments, including crime suppression, drug suppression, investigation and administration, were presented awards of merit recognizing their outstanding contribution in their respective fields.

“I think I’ve been presented this certificate because I and my team continually make drug arrests, closing about four cases a month,” he added.