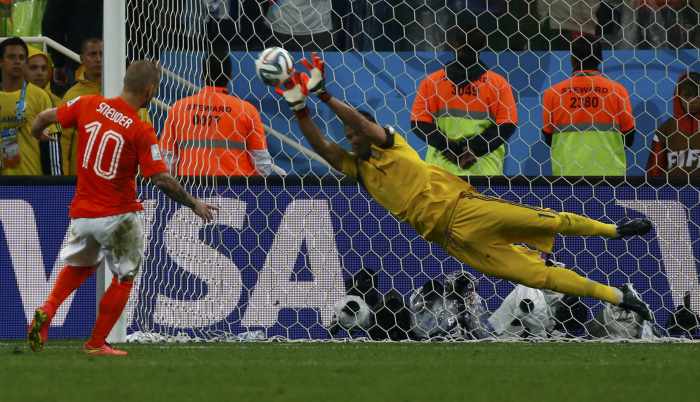 PHUKET: Argentina’s Sergio Romero saved two penalties in a 4-2 shootout win over the Netherlands to seal their first World Cup final place in 24 years after the first ever goalless semi-final at the end of extra time on Wednesday.

Romero plunged low to his left to save the first penalty kick from defender Ron Vlaar and then made a superb stop from Wesley Sneijder as Argentina’s jubilant fans went wild at the Corinthians arena.

The pressure of scoring the winning penalty kick fell to Argentina substitute Maxi Rodriguez who slotted high past Jasper Cillessen, with the Dutch keeper failing to emulate the heroics of backup Tim Krul in their quarter-final win over Costa Rica.

Twice champions Argentina now travel to Rio de Janeiro for Sunday’s final against old rivals Germany, who thrashed hosts Brazil 7-1 in the other semi-final in Belo Horizonte on Tuesday.

It will be a repeat of the 1986 and 1990 finals and the first time the same two teams will have faced each other three times in the title decider.

“…I’m really happy with everything,” goalkeeping hero Romero said in a televised interview. (Penalties) are a question of luck, that’s the reality… I had confidence in myself and, fortunately, everything turned out well.”

Argentina coach Alejandro Sabella added: “I’m very happy because we reached the final and now we will see what we can do. We will give everything as usual, with humility, work and 100 percent effort.”

Disappointed Netherlands winger Arjen Robben told Dutch TV: “It hurts but we gave it our all this evening and it’s grim going out in this way… I have to be proud of these guys…”

With Brazil’s harrowing defeat still fresh in the mind, caution was the watchword of a tactical first half as both sides felt each other out and battled for possession across the pitch in a defence-dominated encounter short on entertainment.

Nigel de Jong, best known for his chest-high kick on Spain’s Xabi Alonso in the 2010 final which the Dutch lost, completed a remarkable recovery from a groin injury to play in midfield and clearly had orders to shadow Argentine playmaker Lionel Messi.

Argentina had equalled their longest winning streak at a World Cup with their 1-0 victory over Belgium in the quarter-finals, but all five of those wins were by one-goal margins and they were even less creative without the injured Angel di Maria.

Four-time World Player of the Year Messi, who was kept quiet by his standards, did test Cillessen with a free kick early on while Ezequiel Garay stooped to head a corner over the bar under pressure from Vlaar but chances were few in a dire first half.

The second period was equally cautious as the Dutch failed to record a shot on target for the entire 90 minutes before Arjen Robben burst into the box in the dying moments, only to be denied by Javier Mascherano’s well-timed block.

Argentina substitute Rodrigo Palacio missed a gilt-edged chance in the second period of extra time when he broke clear and his tame header was held comfortably by a relieved Cillessen before Turkish referee Cuneyt Cakir called for the shootout.

Netherlands defender Vlaar said of his missed attempt: “In the penalty I wasn’t nervous I, concentrated. It had to go in and it didn’t.

“We didn’t get that many chances (during the game). We could have created more chances, but we didn’t. We didn’t get the chance to score and that’s a shame.

Argentina substitute Sergio Aguero, who converted his penalty in the shootout, said of their victory: “It means so many things, a lot of people didn’t think that Argentina would be in the final, but we know what a good team we have.”