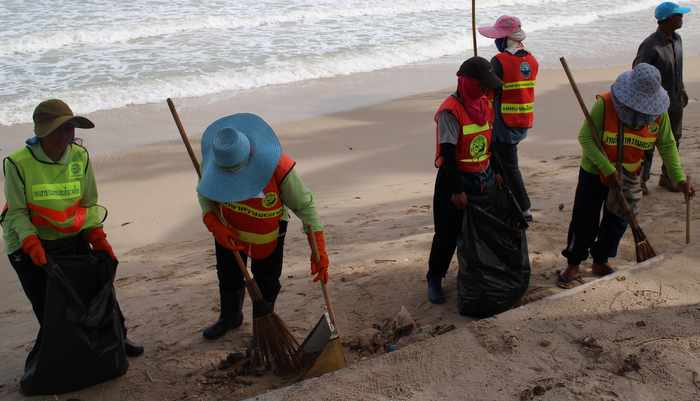 PHUKET: Local residents have been forbidden to make any changes to the island’s new beachscape by order of Phuket Governor Maitri Inthusut.

“If anyone tries to alter the beach landscapes or is caught violating the details of this order, they will face legal action,” the provincial order read.

The order also provided the sole circumstances under which the beach could be changed.

“Only government officials who have been ordered to beautify the landscape, employ methods to combat coastal erosion, enhance beach safety by erecting surf warning signs, placing moorings for boats or carrying out an activity approved by the governor will be able to alter the new landscape from what it is now,” the notice read.

Phuket’s west coast beaches have undergone a full-blown makeover during the past few weeks after the National Council for Peace and Order (NCPO) mandated that the beaches be re-organized and public land returned to the people.

The most recent cleanup took place today in Patong, during which more than 1,000 beach vendors tore down their structures (story here).

A meeting to devise a plan for the vendors’ futures is in the works after a group of displaced and disoriented vendors confronted Patong Mayor Charlermluck Kebsab and Kathu District Chief Sayan Chanachaiwong as they arrived to inspect the cleanup this morning (story here).