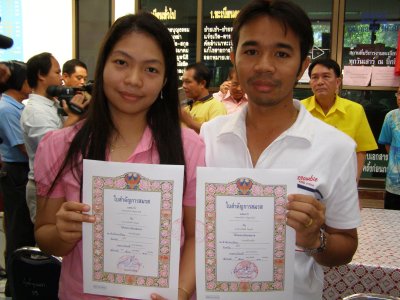 The number of couples wed at Muang District Office was somewhat lower than last year, when 142 couples took the plunge, but still far more than the office’s daily average of about 10.

Perhaps fearful that the romantic atmosphere would be ruined by spoilsports, the Muang District Office weeks ago posted a notice announcing that it would refuse to accept any applications for divorce on February 14.

The first to be wed in Muang District, at 9 am, were Dewanan Chareonpornpakdee and his bride Charatsri Khaimook, both 27-year-old Phuket natives. The honor came after the pair won first prize in the lucky draw, taking home a 21-inch television set.

“Today is a day of love, day so I choose to register my marriage today. But even more important, it is also my mom’s birthday,” K. Charatsri said.

She said she met her husband seven years ago, when they were still both students.

The couple were wed in a religious ceremony November 3 last year, but deferred registering the marriage because they were busy – and because they wanted to wait for an auspicious day, she explained.

The oldest couple to register at Muang District yesterday were Anan Yomana and his wife Yee Thongkaew, both 57.

On a normal day, about five couples register their marriages at the two offices.

Kathu District refused to process one application for divorce, while one such application was accepted in Thalang.

“They told me they really needed a divorce and said they didn’t care whether or not it was Valentine’s Day, since the holiday is really not a part of Thai culture,” an officer there told the Gazette.

Police to crack down on foreign labor