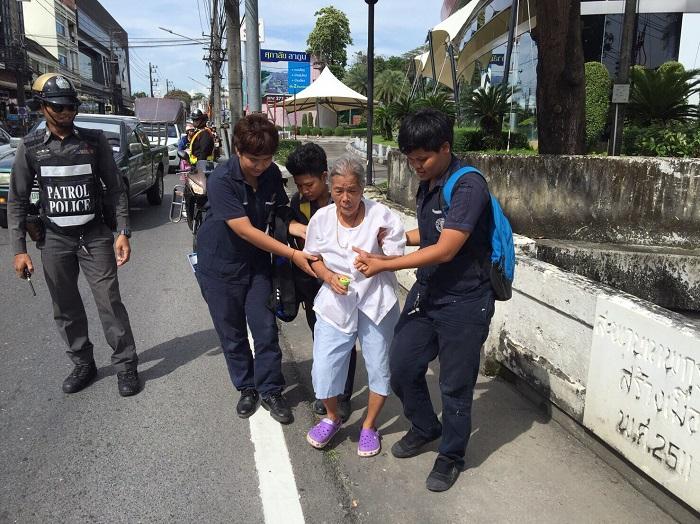 PHUKET: Police and volunteers persuaded a 70 year-old woman not to jump off a footbridge in a suicide attempt in Phuket Town on Thursday. The distraught pensioner said she’d had enough of being beaten by her son and wanted to end it all.

The woman, whose name has been withheld, was perched atop the footbridge at Komaraphat Junction near the Honda outlet in Phuket Town. Police arrived at 2pm and enlisted the help of three technical college students to talk her down, which they were able to do after about 15 minutes of negotiations.

Phuket Police Colonel Chaleaw Taihoo said the woman was crying and her face had cuts and bruises that she said her son had inflicted on her.

“She lives nearby and said she could no longer stand her son’s violent outbursts, saying the bruises on her face and swollen eyes were a result of her son punching her in the face several times that day,” said Colonel Chaleaw.

Medics treated her at the scene before handing her over to staff from the Department of Social Development and Welfare until her relatives could be contacted.

Police could not immediately trace the woman’s son but said they would question all parties involved to get to the bottom of the issue.

“We’d specially like to thank the three students who helped talk her down,” said Col Chaleaw.