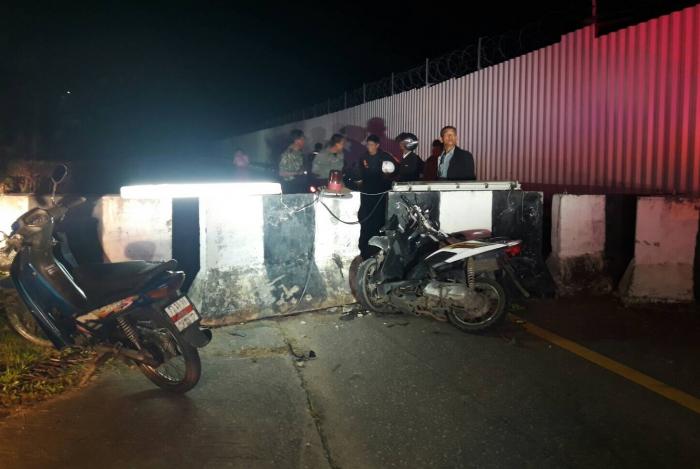 PHUKET: A speeding motorcyclist broke his neck last night in a fatal high-speed crash with a concrete barrier placed across a back road near Phuket Airport.

Witnesses told police that the rider was moving along the road extremely fast in the direction of the airport on a Honda Click motorbike. “It seems he didn’t know the barrier was there,” said one of the bystanders.

Tah Tat Chai Police officers arrived on the scene at 8:45pm and later confirmed that the rider was a 25-year-old Thai man named Saran Nattabuth.

The crushed motorcycle was lodged between two of the black-and-white painted bollards. His crumpled body lay on the other side.

The lane had once been a through road leading to the runway, but was blocked off with four heavy-duty blocks some time ago due to a landslide caused by continuous heavy rains in August (story here).

As a safety measure, fluorescent strip lights and a rotating red light had been placed on top of the barriers, which authorities claim were functioning prior to the crash.