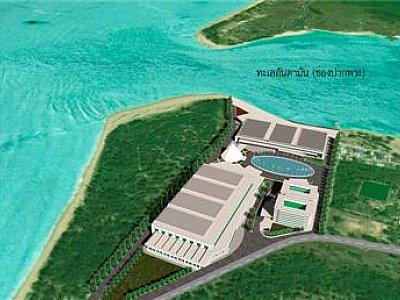 PHUKET: The latest turn in the decades-old saga of Phuket’s fruitless efforts to build a world-class convention and exhibition center taxes the nation’s credibility.

It recently came to the attention of the Department of Public Works and Town and Country Planning that the140 rai of coastal land slated for the project lies in a “tsunami risk” zone, necessitating the need for a major redesign.

For years it remained debatable whether Phuket really needed a convention and exhibition center at all. Most successful convention centers are located in major metropolitan areas, ensuring that millions of potential visitors are within easy driving distance.

However, the relentless growth of Phuket over the past decade now makes the lack of such a facility a glaring deficiency, especially as the Commerce Ministry has begun touting Phuket as nothing less than the future “Tourism Hub of ASEAN” after the regional free-trade agreement goes into effect in 2015.

That Phuket can attract large-scale international gatherings is no longer a matter of dispute. The island hopes to host the postponed ASEAN summit meetings as soon as next month, following on the successful staging of the ASEAN Ministerial Meeting in July 2009.

Meanwhile the Laguna Phuket resort complex in Cherng Talay is already grappling with the logistics of hosting the Amway China incentives pow-wow that will see some 8,000 sales reps from that company visit the island a year from now.

AirAsia’s successful establishment of Phuket as a regional air hub, and reports that Australian carrier Strategic Air has similar plans, combined with a record number of tourist arrivals in 2010, further highlight the island’s emergence as a major international destination.

The Abhisit government’s approval of 2.6 billion baht in funding for the project, under the Thai Khem Khaeng (‘Strong Thailand’) fiscal stimulus package, has brought it as close to reality as it has ever been, yet observers who have tracked the heartbreaking history of this endeavor know all-too-well that political factors can set it back to Square One at any time.

It also comes as a sad irony that the latest design by project architects reached the computer graphics stage, with a “Sino-Portuguese/sea turtle” theme, before obvious concerns like tsunami preparedness ever entered the equation.

The Phuket Gazette has to wonder how it’s conceivable that the tsunami risk factor has entered into the criteria for site selection post facto. The site was chosen and approved by Cabinet in 2009.

In November that year, Deputy Prime Minister Korbsak Sabhavasu, a member of the Democrat party, visited the site. Asked by a doubtful reporter if this would “definitely” be the location for the center, he replied “1,000 percent“.

Whether or not the current plans for the project are ever realized will likely rest with the fortunes of the Democrats in the upcoming national elections, expected to take place within the next few weeks.

If Mr Abhisit cannot form a coalition after the poll, the future of the Phuket Convention and Exhibition Center will face far more uncertainty than it does today – even after the revelation last week that the site is near the sea.

Phuket Opinion: Captive dolphins pitied, even in the Land of Smiles