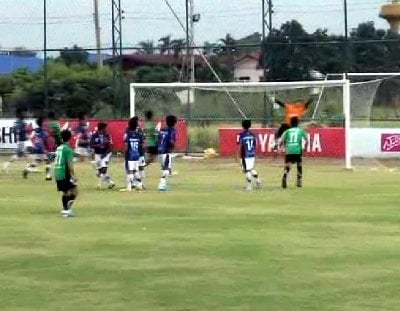 PHUKET: FC Phuket pulled back from down two-nil to salvage a point on the road at Samut Prakan in the Thai League’s Division 1 yesterday.

The Southern Sea Kirin appeared to be on yet another hard-luck road trip when Samut Prakan’s Lee Tuck scored early in the second half and then set up teammate Weerasak Kiatsoong-nern put his side up 2-0 at 59 minutes.

Tuck, the only Englishman playing in Division 1, was later named man of the match.

But FC Phuket fought back with a beautiful goal into the top-right corner by Nitirote Sukuma at 67 minutes.

In other Division 1 matches played over the weekend:

FC Phuket fans will have the chance to see Saraburi in action next weekend, when the Southern Sea Kirin play them again at home on Sunday at 6pm.

For a complete report and league table, pick up the next hard copy of the Phuket Gazette.