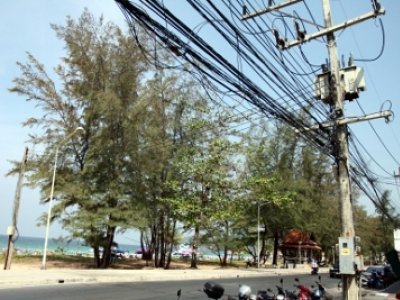 PHUKET: Following a spate of cable-cutting incidents over the past few months, local cable providers around the island are fed up.

Mr Kampanat said he was acting on behalf of a consortium representing all cable TV providers on Phuket.

The request asked PEA to perform a thorough investigation of their transmission line towers to determine whether any unauthorized cabling was evident, and if so, to put an end to it.

The cable companies claimed their services have been constantly interrupted due to the cutting and unplugging of their cables.

Having found suspicious, unrecognized fiber-optic and coaxial wires at the towers where their own wires were tampered or removed, Mr Kampanat said he believes private-sector competitors were responsible.

At least three incidents in April were reported among his consortium members, Mr Kampanat said.

Cable TV wires were deliberately cut, unplugged and damaged at towers near Tesco Lotus and later around Makro – including 3BB cables – during early April, he added.

After inspecting the latest incident, which occurred late April in Koh Kaew, his associates gathered evidence including one of their own severed cables, a pair of wire cutters, and they even claimed to have identified a suspect at the scene.

A police report was filed and was submitted along with the request for action to the PEA, he added.

The PEA investigation is underway and Mr Kampanat hopes to hear preliminary findings this week.

Another local cable competitor, Phuket Cable, told the Gazette their technicians had also reported cut or tampered cables that resulted in interruption to their services.

Two incidents in March included mysterious cable cuttings around Sakdidet Road in Wichit and another incident near Land & House Park in Chalong.

These incidents were not reported to authorities and the wires were fixed by the company. Miss Auttira, an administrator at Phuket Cable, said she was not aware of any similar incidents in April.

Phuket coral gets its groove back