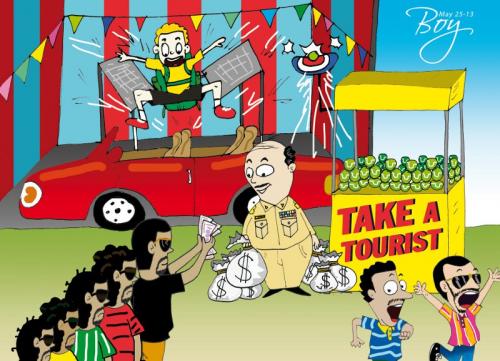 PHUKET: The allegations of abduction of a female Chinese tourist by an illegal taxi driver operating out of Phuket International Airport once again highlight the need for a comprehensive overhaul of Phuket’s arcane, baroque and disreputable “public transport system” (story here).

The shocking allegations against “independent” taxi driver Paitoon Kruain could not have come at a more conspicuous time: just days after Airports of Thailand (AOT) officials once again caved in to the demands of Mook Andaman, a local co-operative comprising “black-plate” taxi drivers using standard cars illegally as taxis.

The AOT allowed Mook Andaman members to join the three groups that hold concessions to operate at the golden goose that is Phuket Airport, bending to their demands after drivers staged a series of protests coinciding with Phuket’s hosting of the “Airports Council International Asia-Pacific Regional Assembly”. This was a clear demonstration of the balance of powers at the airport for the entire Asia-Pacific region to behold (story here).

Past and present problems involving taxis and limousines serving tourists at Phuket Airport are innumerable. They are nevertheless just a microcosm of the greed-driven mess that passes for a public transport system here on our island.

Yes, there are some good taxi drivers operating in the industry – as we have seen several times from reports of valuables being returned to passengers – but the system itself is in desperate need of a complete overhaul.

Historically, local politicians have blamed Bangkok while handsomely profiting from the status quo, as the AOT does from the concessions they charge. However, the AOT, taking in over one million baht per month from each of the three taxi concessions alone, is unlikely to be the only one benefiting from these concessions.

The danger of this greed to individual tourists and the tourism industry is made apparent in Mr Paitoon’s abduction of his 19-year-old fare from China. Mr Paitoon, willing to undercut the inflated prices charged by legal operators at the airport, was able to lure this solo traveller into his vehicle.

Exactly what fear and uncertainty filled the young woman’s mind as her driver, high on methamphetamine, allegedly held her behind locked doors for five hours is anyone’s guess; but what is less in doubt is the impact this will have on our island’s reputation as a tourist destination in China – Phuket’s greatest tourism source market frontier.

Phuket is perfectly suited to become one of China’s most popular holiday destinations. We stage and enjoy an unbroken stream of cultural traditions, like the Vegetarian Festival, for example, that are immensely appealing to mainland Chinese, who saw much, if not all, of their own traditions expunged during the Cultural Revolution.

We plead, yet again, for government leaders, local and national, to deal with this issue, not only as a matter of national economic importance – but of local pride.

Phuket Opinion: Do you speak Zulu?