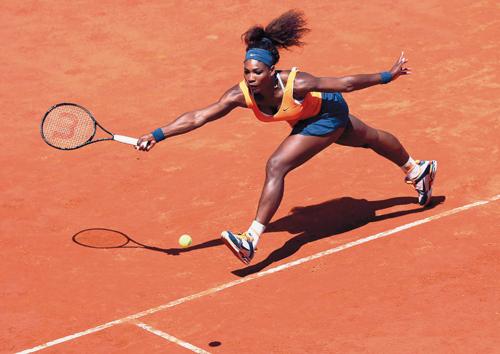 PHUKET: If I were a gambling man, which thank the Lord I’m not, then a punt on Serena Williams and Rafael Nadal would seem an obvious bet for the French Open.

But even linked together as a double, the odds would be prohibitively short. Why? Just look at their 2013 records. Rafa, back after a seven month lay-off, has reached eight finals in eight tournaments – and won six of them. Before the climax of the Italian Open in Rome, he declared with his usual modesty: “These are emotional moments for me … after many months of doubt, I am able to play at a level I would not have dreamed of four months ago.” He then went on court to dismiss Roger Federer while only losing four games.

Serena Williams has also been playing with enormous authority and conviction. At the women’s final in Rome, she made relatively short work of Victoria Azarenka, herself a world number one not so long ago. It was the American’s fourth consecutive tournament victory and the score of 6-1, 6-3 reflects her dominance, despite some spirited early resistance.

Even more telling is her tally of wins: Fourteen to the Belarusian’s two. Williams dropped only fourteen games in five matches during the Rome tournament, and at thirty one, when most players are beginning to feel their age, she is going from strength to strength. To the most powerful shots off the ground and the heaviest serve in women’s tennis, she has added mental resolve, conviction and, above all, consistency. As she declared after the win, much to the chagrin of her competitors: “I feel great. Never felt better.”

Sharapova, who defends her French crown at Roland Garros, pulled out of her quarter-final match in Rome against Sara Errani due to a recurring sickness, but in the previous tournament had already lost to the American. Azarenka got it right when she said of her opponent: “She’s been playing her best tennis for the past year and a half or so.”

What of other men’s chances in the first Grand Slam of the summer? Djokovic, beaten by Berdych in Rome, seems to have lost a little of his luster. Although he has been number one for what seems like an age; he can never be discounted. Moreover, his record against Nadal is impressive.

Murray, still the world number two, has a lower back injury and is not even sure that he will make the starting blocks. His confidence is on the wane and, frankly, he has not played enough competitive tennis this year.

Federer, despite his wonderfully consistent record in reaching tournament finals, is not the irresistible force he once was, and his record on clay against Nadal – eleven losses out of thirteen – speaks volumes. Of the other contenders, only big hitting Del Potro and Berdych have a game that is conceivably powerful enough to trouble the favorites.

World number two Andy Murray has pulled out of the French Open after failing to recover from a lower back injury which he aggravated at the Italian Open last week.

“It’s a really tough decision and I love playing in Paris, but after seeking medical advice, I am not fit to compete,” Murray said in a statement released by his management company.

“Apologies to the organizers and thanks to everyone for the messages of support. Now my complete focus is on getting back on the court as soon as possible.”

Murray retired injured in the Italian Open second round in Rome on his 26th birthday last Wednesday after leveling his match with Spaniard Marcel Granollers by winning the
second set.

“I’d be very surprised if I were playing in Paris,” he said after having treatment on court. “I want to make sure that it’s something that I can sort out. It’s not enjoyable to play now.”

The French Open, which starts today at Roland Garros, will be the first grand slam Murray has missed since Wimbledon in 2007 when he had a wrist injury.

He will now focus on preparing for the grass court season and set his sights on being ready to play at Queen’s Club, the warm-up event for Wimbledon starting on June 10.