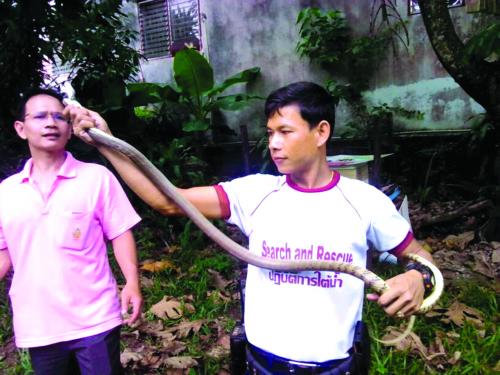 Watchara Srikacha, 26, has been catching snakes since he was 10 years old. Originally from Sisaket province in Thailand’s Northeast, Watchara has been working with the Kusoldharm Foundation since he came to Phuket almost five years ago. Part of his job is catching snakes. Here, he explains why more and more snakes are appearing in residential areas of Phuket.

PHUKET: We’ve been getting a lot of calls from people about snakes lately, and we catch a lot of them, almost one a day. They like to enter people’s houses and cars. It’s the rainy season and the snakes are trying to find a dry place.

The snakes might bother people, but there’s no point in blaming them; they’re not trespassing, we are. The jungle and rainforests used to be their home, and now we are encroaching on their area by building more and more houses all over the island.

I understand that more people are coming to Phuket and we need more land for them to live on, but we need to find a way to share the space with the local wildlife.

We should be very strict on not allowing construction in national parks and we should restrict building on hillsides, which requires cutting down a lot of trees. In this way, we can reserve some land for the animals.

If you ask me whose side I’m on, I’ll say I’m on the snake’s, because they aren’t aggressive. They’re scared of people. That’s why I’m not scared of them. I’ve never been attacked or bitten by a snake.

I learned to catch snakes by myself when I was about 10 years old. Snakes used to come into our house, and when only my sister and I were at home, it was up to me to catch them.

At Kusoldharm, there are more than 10 of us who can catch snakes. When we receive a snake call, we usually send out two people.

One trick we use is to play with them before we catch them – we make them move around until they get tired out. Then they’re easier to catch.

The longest king cobra I ever caught was about five meters. It was bigger around than my arms.

After we catch them, we let them go in a forest. We normally take them to hills behind Patong, where we believe they will be safe. We make sure to leave them on relatively flat surfaces, so they won’t get swept away by water when it rains.

And we make sure that we set them free far from where people live. We don’t want them to bite people and we don’t want people to kill them.

People shouldn’t try to catch a snake by themselves, even ones that are not poisonous.

One time a guy caught a python by himself, thinking it wasn’t dangerous because it wasn’t venomous. But he was bitten very badly on the arm.

When snakes bite, they sometimes pull your flesh off. That guy’s wound couldn’t be sutured. Just because they’re not poisonous doesn’t mean they won’t bite you.

Even those of us who have a lot of experience have to be very careful whenever we catch them.

Phuket Opinion: The road not taken

Phuket Opinion: For tourists, due diligence is essential, as is due skepticism for media hype