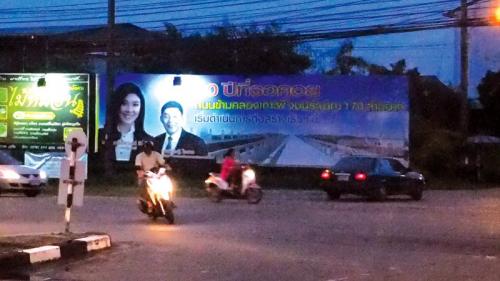 PHUKET: After a road trip off island, a resounding thump lets you know you’ve arrived back home.

I can’t drive anywhere in Phuket anymore without crater divots and potholes lurking in front of me, threatening to bring my motorbike scuttling to the ground or sending a wheel on my car scraping high into its arch.

Each time I stop at a particular set of traffic lights on Sakdidet Road, I face a billboard featuring Prime Minister Yingluck Shinatwatra smiling blankly at me with the words emblazoned in Thai above her, “20 Years of Waiting.” She’s right. And we’re still waiting…

The slogan is a reference to how the Pheu Thai administration will finally deliver unto Phuket the long-awaited Klong Koh Pee elevated road project, blessed by the mighty Cabinet whose special dispensation is needed to build such a road over a protected mangrove forest (story here).

Phuket was unable to get that dispensation for the International Convention and Exhibition Center (story here), which would also have encroached on mangroves, but the Klong Koh Pee elevated road is a pet project of former Phuket governor Wichai Phraisa-ngop, who now serves as a party list senator and as a member of the Senate Standing Committee on Tourism. Funny how it got the green light.

I do not blame the local Highways Department officials for the state of Phuket’s roads. They do what they can, as shown by the resurfacing of the bypass road and the introduction of the innovative Koh Kaew u-turn (story here).

And they are right to keep wailing about how their budgets are set by the registered population, instead of the number of people actually on the island and using the creaking infrastructure. The restricted funds greatly hamper Phuket’s development.

If Deputy Prime Minister Plodprasop Suraswadi wants Phuket people to vote for Pheu Thai (story here) – which he made plain at the opening of the Chiang Mai Convention Center – Pheu Thai should consider doing something that serves the needs of people here, keeping in mind that pleasing Phuket people – many of whom come from elsewhere in Thailand – means good press in other provinces too.

Chanchai Doungjit of the Tourism Authority of Thailand (TAT) Phuket office last month was happy to report Phuket is attracting 11 million visitors per year, generating about 200 billion baht for the local economy.

But, Mr Plodprasop: Is there any chance Phuket can get a slice of that pie?

Phuket Opinion: Snakes in the house: who you gonna call?