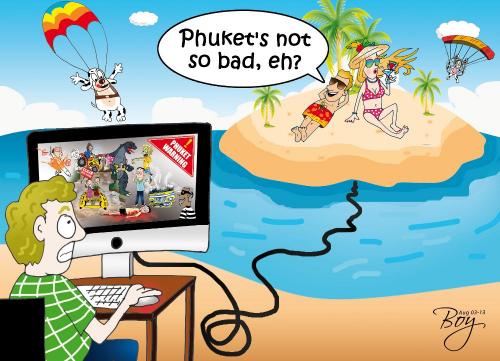 PHUKET: Tourist safety issues have been a hot topic in the news lately as the number of accidents and crimes involving foreign visitors continues to grow with the largely unregulated expansion of the island’s tourism industry.

Despite the often colorful announcements of an impending “crackdown” on this or that, or the establishment of another new “safety zone” or other largely cosmetic, public-relations campaign, the fact is that the island’s socio-economic development in recent years seems to make it an increasingly attractive destination for a wide range of visitors: from stateless Rohingya arriving over open ocean in rickety boats to those touching down at Phuket International Airport in private jets before being whisked away to a five-star resort or someone’s mega-villa..

The need for better security in Phuket has at least registered at the national level, as is evident by a slew of recent developments and pronouncements. These include 251 million baht in funding for the installation of 2,450 more CCTV cameras (story here), calls by the governor for a massive increase in police manpower, a Department of Special Investigations crackdown on illegal taxis (story here) and the establishment of an Organized Crime Center for Tourism at Phuket Airport (story here).

With so much information on safety-related issues in Phuket available online, one can only take pity on first-time, independent tourists with little or no knowledge of the island elements to steer clear of.

Those who do their homework and research Phuket will be inundated with a virtual tsunami of things to worry about: everything from very real dangers, such as rip currents and riding a motorbike, to the completely over-hyped, such as being trampled by elephants.

Despite the recent global media attention on safety issues, Phuket remains a relatively safe destination, at least for people with a modicum of “street smarts” and common sense.

Though the trend in crime statistics may show an increase, who could reasonably expect otherwise as the island becomes increasingly urban and more densely populated?

For the reader who might come across this trend as part of doing their “due diligence” before travelling to Phuket, we would advise reading the safety warnings posted on their respective government’s websites, taking into consideration that these tend to err on the side of caution.

Tourists are also strongly advised to arrive with adequate travel insurance, as most recently encouraged in an announcement by German honorary consuls (story here). The Thai government should seriously consider making travel insurance mandatory for foreigners, possibly making it available to them on a temporary basis through its own social security scheme.

Phuket Opinion: Snakes in the house: who you gonna call?

Phuket Opinion: Our environment down the drain