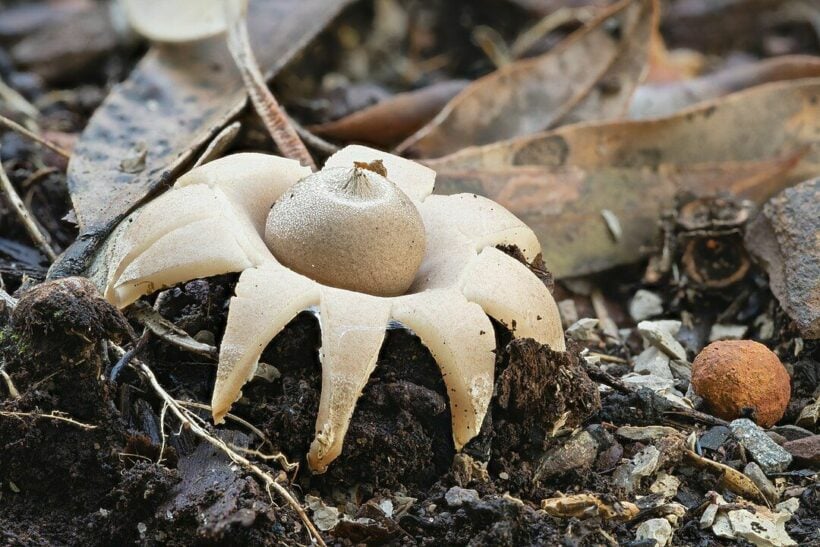 PHOTO: Earthstar mushrooms, one of the rarest species in the world, were found in Phetchabun. (via Wikimedia)

In Phetchabun, a local villager was clearing a forest area when he discovered what is believed to be earthstar mushrooms, one of the rarest species of fungi in the world. The extremely scarce mushroom is rumoured to cause a sensation of intoxication similar to being drunk if someone were to consume it despite technically being classified as inedible.

The mushrooms, whose scientific name are Geastrum mirabile Mont, are ranked as one of the 10 rarest mushroom species in the world.

The villager was clearing forest area on his land near Wang Cha-om village when he stumbled upon the uniquely shaped fungi. The mushrooms appear almost like a flower bloom with a brownish-grey colour and a star-like shape. The mushrooms are about 3 to 5 cm in diameter.

When the man pulled one out of the ground, he saw that it had spores and roots and was not a flower from a golden Spanish cherry tree, his original suspicion before realizing that those trees were not indigenous to the area.

Seeking advice, he brought the mushrooms to his brother who identified it as the rare earthstar variety. Until now, the incredibly scarce fungi had only been found in Thailand in Nakhon Phanom, Nakhon Ratchasima, and Phichit provinces.

Locals in the area said they had never seen anything like the earthstar mushrooms, with some telling reporters that in the 40 years they have lived in the area this was the first they had seen of it.

Nobodysfriend
On 9/26/2021 at 7:40 PM, Thaiger said: to cause a sensation of intoxication similar to being drunk That's good news to some ... but not to the already rare mushroom .

KaptainRob
They aren't all that rare, hard to find more like.  We buy them once a year, about now, and the wife cooks them in a variety of dishes and freezes the rest for off-season use.

Police search for foreigner for rape of Khon Kaen masseuse